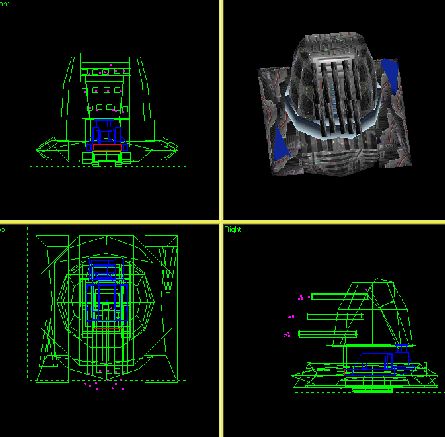 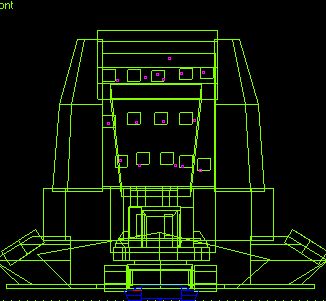 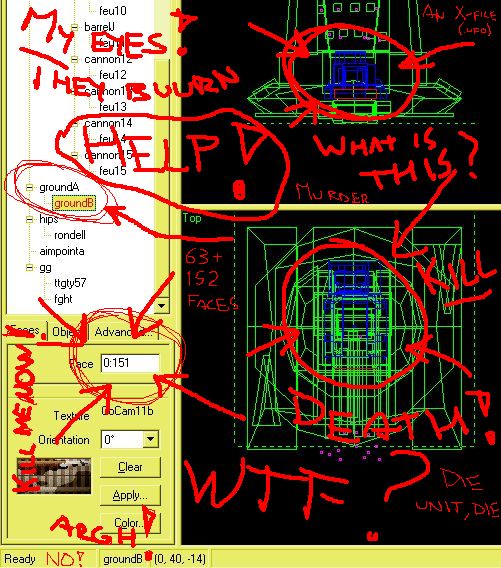 Buildpic: First of all, the one you see far up there is very pixelled and that's because I had to resize the 64x64 picture since the .pcx usually found in unitpics was a relatively nice picture of a tank (a normal tank with tracks, turret and a barrel. How it got imprisoned inside this git, I don't understand) + a .bmp picture (secretly hidden in the wrong folder) that repetealy crashed my HPIViewer until I understood that the very intelligent progam got a nifty security switch not to show pictures that severely damage the uniser's brain. Now, to the picture itself... What I see when I look on it is a blob. Yes, a completely nomal, deadly dark blob without any real details but some pointy things and what looks like an obscured blue fruit plate. Naw, even if it is very dark, it does actually look like an ... err ... something [1]. The background is the very same as for Severation and Bhaal... (Isn't it a pattern?) [1]. 3D feeling? Pfeh... [0].

Model: HRAAAAAGHLUUURGH !! NRUUUSNNRAAAAGL !! AAAWWHUUUUL !! MY EEEYESS !! THEY BUUUURN !! Well, in normal cases, I would end screaming here and start explaining the horror, but in this perticular case, I feel I must scream a bit more... WHAT FACE CRIME I KNEW OF, THEY WERE PETTY THIEVING... THIS IS A SMEGGIN MURDER !! I THINK I'M IN ACUTE NEED OF A SUICIDE OR AN EPILEPTIC SEISURE, WHICHEVER COMES FIRST !! I could never in my live ever imagine that such a horrible, terrible and Core forsaken creature would roam freely in my favourite game. My god, THIS MODEL IS SO BAD, IT MAKES STARCRAFT SHINE IN GLORY !! Okay... whew... you had your little scream... now settle down and explain to the unknowing crowd what terror you had to face what binary horror you fought... breath deep... that's it... stop drooling fool, get a napkin... easy now... don't smash your forehead onto the keyboard again... another blow and we will have to buy a new one... again... okay then, here we go... This unit is a fourteen-barreled big black blob screwed onto a similar blob that has been smashed to look flat. Surely, the description talked something about a fifteen-barelled Morty but there must have been a slight miscalculation and I myself admit that the barrels are a pain in the ass to count as they aren't really aligned or anything like that... merely floating around for themselves as they please, trying to look as disorted as ever possible (which they actually suceed to do, just look again on the second screenshot). And yes, this creature reminds just as much about the Morty as Saddam reminds me of sex, but that may just be me and there are other, more talented associators out there that can link anything to anywhom. So, further on this evil describing quest, I see a big semi-sphere that contains the above mentioned fifteen minus one barrels and about too many faces along with them. Maybe of the many gnomes that lives in there and uses up polygons on furniture and yakuzzis. Itself the err... turred is placed on a big blue plate that seems more as a perfect gift to your worst enemy than any actual device to put a turred full of gnomes and fifteen minus one barrels on. I bet all the gnomes are lefties. The big blue plate is nicely smashed into something big, square and flat that under closer examination vaguely remind me of tank tracks, only this time damaged beyond all recordnition including inbreeding, prostata cancer, caries and a horde of left-handed gnomes. It is now that we come to the actually interesting part for inside the large, coal look-alike creature there is a tiny, tiny unit that uses up faces as never before. I've extrapolated it and it turned out to be a small... whatever it is, you can make your own guess [ here ]. It is the small part highlighted in the first screenshot + one just beneath it. Not to mention that this little sucker never is seen in the game and highly probably uses the bigger unit as a plain hiding place, it haven't even got the underside faces removed. And now things get even more interesting since in the middle of the small unit I found [ this ] and extrapolated it separately. It is the piece highlighted in the second screenshot up there and what it is, I have no idea, but it does surely not fit into the previous unit. Personally, I think that this is the brain that controls everything the gross unit does, so all you have to do to kill it is to crawl underneath the tracks and sneeze on it. To sum it up, there is a microscopic unit packed with all the spare faces, that the other parts couldn't carry, hiding in a bit larger unit, that is hardly face cut at all, that is completely covered by a big flat dark thing that only from a distance (a light year at least, but the longer away, the better) can be associated with tracks, in which a blue fruitplate that only your worst enemy deserve is nicely smashed in, carrying a semi-globe full of left-handed gnomes and fifteen minus one rasta-barrels. The face size of the total thing is so horrible that I don't even dare to mention. Both Beelzebub and Bhaal faint in comparison... [0] The texturing skills are only surpassed by the Severation, but being second worst after it is no merit, I assure you. The whole tank is covered in epileptic black with some desperate attempts to a coordinated shades, but they were probably shot before they had time to accomplish anything. Under cover of the big black thing, the textures on the inner unit(s) assembled themselves rather nicely however and it's just a pity that they never cast off the dull camouflage (it's completely invisible in a midst of a dark hole, I've tried) and dance around themselves [0]. The corpse is actually a fully normal, wrecked tank textured in the very same texture all around. This model will never cease to surprize me, it seems... My guess is that the original tank unit .ufo got invaded and corrupted by an evil vyrus (not even Melissa or Love letter are evil enough to commit such atrocities against humanity, so it must be a real goddamn vyrus) that emulated this horrible creature of which only bones and corpses remain [0].

Balance: For the same costs, I could pump out 10 Goliaths that together would not only have 30% more armor, but would do more than double damage (however on half the range) and against ten Goliaths, this guy wouldn't stand a chance, seing how inaccurate the weapon fires. Hell, if you even could get a flash within fire range, the M-15 (isn't it the american standard rifle?) would overshoot forever and die after a while. The more units cost, the more cost efficient they should be, yet this is not, being less cost effective as any level 2 unit (I dare even say Freakers and Zippers).

My score: GO AWAY AND NEVER COME BACK !!