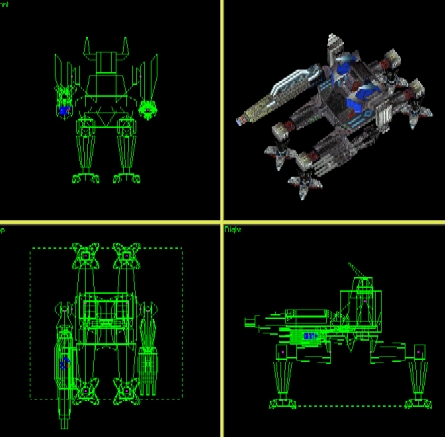 Buildpic: First of all, the buildpic seen on the top of this page is an old variant that still circulates on the TAU forums as the creators avatar (as 64x64 pixels, so the resizing made it look really awful) and unfortunately I was forced to use it. You see the "buildpic" used in the game would most certainly mess up my curent menu system as it takes up the entire buildpage in the Hellforge factory (that is 2x3 ordinary sized buildpics). I can tell you, however that the picture in the game looks very good with an exception for the very flat and monotone terrain that would certainly feel alot better if there were som size-comparative obstacles, as for example a fusion in under the body.

Model: The first ever impression anyone will receive from this unit is chock. Definite shock over the size. I mean this guy is really fucking giant, no problems if he wants to go around among Intimidators since they hardly reach up to his ankles. The face count is one of the most extreme I encountered, but when realizing that this unit is quite many times larger than a Krogoth (he can in fact leap over Krogs as well... not in the game, but technically possible) the face count itseld isn't quite as important. However that does not change the fact that there are painfully many completely useless faces. That does disturb me a whole lot, especially when looking through it in the 3DO Builder that started to lag so heavily I could make a move and then go to the kitchen to pour up more Coke just to get back in time for the update on the screen. I like the design of the torso and the legs when looking like normal legs and not a chair on both sides like on the screenshot above, together with the big photon cannon. On the other hand, the chaingun cannon hand is really ugly (especially the gun itself) and the knee joints left alot to desire. Bonus, however on the innovative design and the horns :D [3]. I can imagine the workload that lies in texturing such a gigantic face ammount, but I still feel that it coul dbe done a bit better. The torso seen from the back is ok and the feet (not legs, mind you) are acceptable. Much of the rest could be made im more variated style to prevent this unit from turning into mainly a grey blob on certain occasions, especially when it comes to the upper parts of the legs and the shoulders [3.5]. Then I ask myself why the corpse is about one fourth as large as the original unit and being awfully textured on some places. On the other hand, I don't think that this unit is supposed to get killed... [0].

Script: Flawed alot. Besides the bad habit of the monster to cross the arms inunder the torso (straight through it), the weapons are bad functioning, sometimes refusing to fire alltogether (especially the demonic aura that works in one case of five). The chaingun forgets to roll from time to time and it is very interesting to see a constant flare on one of the barrels while all four take turn to animate recoil. The recoil on the left arm is too small and too slow. The walking could be done better if the feet were lifted in the air much more (they certainly don't look like they are lifted more than say three degrees) and on one occasion all the legs just froze and completely ignored all my attempts to get them working. Still it looks so cool when both arms turns at opposite directions and this unit start to look really evil. The flames emitted from the certain points when the aura is animated should perhaps be changed into same kind of flames that comes from the Valkyrie/Atlas.

Balance: I really don't know if I even should look on the balancing of this unit. The costs of it are well over my head... Suddenly mr. Krog seems cheap, as the Bub outclasses his costs more than four times and while the armor raise is very small, the weapons have been upgraded quite alot. Especially deadly is the photonic d-roll with 2400 damage for every touchdown that can roll and roll and roll, killing every unfortunate unit standing in the way. The aura of death is supposed to kill all units that happen to come too close, but it is not functioning especially good in the end. The chain-Pun-cannon is pretty worthless compared to it's brothers and as it takes quite a time to aim, it is useless against close-up ground units. The photon cannon can be aimed at close directions, but be aware that the weapon should not be trusted in close-combat as it tends to fire straight down from the cannon, to the right or left mostly as it pleases and sometimes even straight back, threating to demolish your own base or support units if really unlucky. In the end, I've seen several times that a small pack of units are standing about the lenght of a leg from the bub, yet it fails to damage them and what is a super unit for if it can't even defend itself? Underbalanced, is my final say, and quite a lot as well... Armor should be doubled, the deadly aura range doubled and the chaingun changed into something tha can be used against aircraft.

My score: Meh... I don't like it... I don't like pretty much, actually. The costs, first of all, make me sweat only from looking on them (yet there is a record for some submarine on TAUS that costs 900 000+ Metal. The creator should be shot). The size and time needed almost throws me in a coma and the final inability to destruct a close standing A.K. does really ticle my trigger finger. Since the Beelzebub however got quite many fans, I do not dare to ignite the unit file, so I hope you will be satisfyied seeing me burn myself.