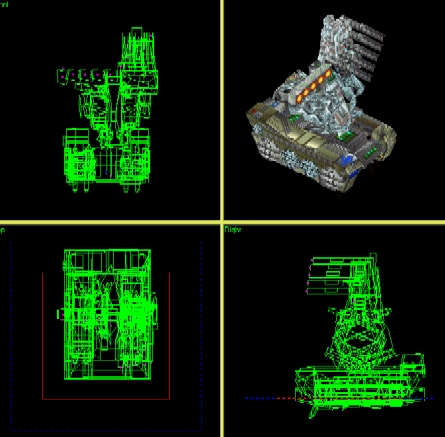 Buildpic: This is the second ugliest buildpic I've ever seen. There are no shades on the pic, the background is still the worst imaginable and the unit is so messy that my eyes start to bleed. This picture should be contaminated and destructed under supervision of highly skilled professionals equipped with level two protective clothing. In short terms: This should not exist. Unit - 0, background - 1, merging - 0.

Model: THIS IS FUCKING MADNESS !! THIS IS FIRST CLASS FACE CRIME !! What I first noticed upon checking this model in the 3DO builder I was horrified by the fact that it took my system 35 seconds to highlight a selected part of the body and slightly less to adjust the screen when browsing the 3D vision (same figure for the enormous Beelzebub was a mere 10). This model is so crowded with useless faces that it's not even funny, yet most of the downward facing faces has been removed. See here and learn how NOT to make a model if you want to implement elegance or brutal power in your unit. Okay, leaving the face-related horror behind my neural spine while my subsystems twitch of the sustained neural damage and moving onto the model itself, I find myself moving into an even larger cruelty of life. The model is only vaguely symmetric since all the corners and edges are desperately trying to flee from it's demented and disgusting design. The cannon "tower" or what it now can be is deformed and simply ugly, as are the "launchers" or whatever they are, that are in desperate need of check up. This model looks completely wrecked, yet it actually is the in-game unit... maybe it is the new "psycho" warfare where you scare your opponents by making them thing that they are attacked by dead units. Furthermore, this model transforms to a very large robot (that is at least two times taller than the Krog) that looks so bad, that it would be an awful atrocity to show a screenshot of it here. The transformation is not thought through the least and not only is the actual transformation ugly, but both end states of the unit are so as well. A lose-lose design-related situation in other words [0]. The texturing is so awfhul, I can't even spell to it. The only only part of the unit that looks average or "normal" are the central top line of the tracks while the rest should be taken out and shot. Entire pieces worth 40 or more faces have the same texture all over. No sign of even simple shading can be traced anywhere, not to mention the so desired Cavedog 3D that divides the elite from the average [0]. The corpse has been nicely cut with four hundred or so faces, so the remnants actually look like a wreckage of some normal unit to cover up the shame of the living version. Struggling with depressive emotions and low self-esteem, this corpse has successfully tried to shrink and is now about 60% of the ordinary unit size [0].

Script: Starting this tag very easily, I must confess that THIS SCRIPT SUCK SO MUCH THAT IT'S NOT EVEN FUNNY !! The missiles are launched from one of the five distorted barrels that seem to alternate normally. But as a missile shot really is a burst of five, the present recoil is critically awful. The laser and the V-rockets are disabled in the tank mode, yet pressing the D-gun will recoil the barrels, even if no shot is fired, yet the tank mode is the least flawed of the states. The tank to mech animation (and the other way around) is clearly too fast and not thought through at all since it does neither deliver any grace nor might that use to be seen in other transformers (comparing with the Lightning). Nay, the real problems lie in the very complicated, yet very dull part of the script that cover the walking of the Bhaal in it's mech form. First of all, it should be really clear that the actual legs of this unit are too lazy and move a frame only every other second or so... if at all, that is, while the eccentric faces in the front of the lower legs wave for all they are worth, symbolizing how fast the legs could move if they did.

Balance: Underpowerful to the edge of self-destruction. For the same metal costs, I can pump out eleven Fidos that will not only almost match it in firepower (counting in the range as well), but severely exceed it's armor, speed, turnrate and overall effectiveness. For an even better overmatch, nine Bulldogs are advised.

My score: I don't give a damn if so this unit was perfectly balanced for this is exactly the unit I have been not looking for my entire life. It is huge in both size and costs. It moves very awful. It got the absolute worst model I've ever seen (Severation can throw itself into a wall, it was merely a square, not a crime against humanity), not to mention the buildpic. I absolutely hate this unit and I do not recommend anyone to download it, seriously. If you do it anyway, despite my warnings, you should be prosecuted, just like what I am about to do with this unit on my drive. And oh, the large unit file size is because of the high amount of crap in the .ufo file.