[ Warning: this unit may be hazardous to your health ] 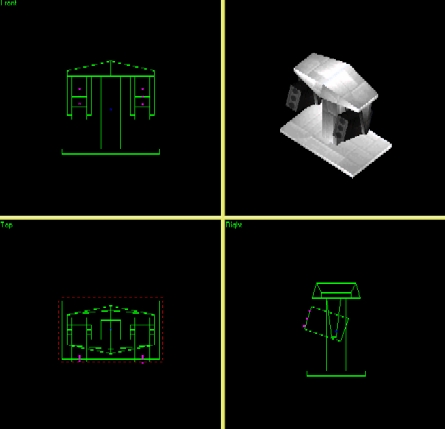 Buildpic: The angle and shading are good, that's about it [1.5]. The backround looks like someone went into MS Paint and used the paintbrush to make this backround, it looks like a green blob.I have a few questions for D4D as well regarding their buildpics. Why do you guys ALWAYS have either a desert or green-blobish type backround? It seems that all the units with these two have the same backround, all that seems different is the angle. Do you guys just import the models into the same file or something and just change the angle and backround? It seems that way to me [1]. God please use more diverse backrounds guys, you should know better. This unit doesn't seem to fit in with this backround at all [1].

Model: The model isn't that bad. It doesn't seem to have any usless underside faces, thank god. I somewhat like this model, as I've never seen something like this before. Some parts though, like the middle pole part and the plate thing, look too squarish, they and make them a bit more detailed or at least try changing those parts a bit. The facecount doesn't seem to be that high, which is good [2]. The textures are very repetitive, and you don't have any logo or team color textures. The textures on this are very basic and borin, try to diversify it a bit. There is also no trace of CD:3D, and it doesn't resemble anything arm texture-wise [0.5]. The corpse erm, looks like roadkill, or like it was ran over by a steamroller. I don't think this deserves full point here, but I'll give it partial credit for the hell of it, jsut cuz I'm a nice guy [0.5].

Balance: It's sort of hard to compare this to anything, considering it's a missle defence system build by the commander. I'll be comparing this to the Arm Defender though. For the cost of a Broadside, you can easily produce 15 Defenders. These 15 Defenders have a combined attack of about 345 damage a sec, and this has 822.6 for same costs. This unit is built by the commander though, so it can be built earlier in the game. This is overpowered like hell, and it has 1/2 the armor of the KROGOTH! *tosses unit into the new URC Monument of Agony subcategory, Storm will explain*

My score: I don't really like this unit. It reminds me of a shaded in tree with a big flat root and two giant fruits or somin. Improve the balance and fix the textures.

Storm's opinion: BURN AND DIE FUCKING MISTAKE OF THE MECHANIZED EVOLUTION !! Can you IMAGINE, dear readers a unit that is MORE OVERPOWERFUL than the CURSED SEVERATION? If the case is you have a fetish for such, you've just found your dream partner for this unit does not only have little less than half the Krogoth armor, it also sucessfully features as much as EIGHTY PERCENT OF THE TOTAL FIREPOWER OF THE KROG while the price tags show a digit more than TWENTY TIMES LESS !! I will NOT and I repeat NOT accept this DISGRACE. This COMPLETE and UTTER SHAME and HUMILIATION of having this unit on my lists. To place this unit on the same listing as the GLORIOUS BHAAL or SEVERATION is equal to placing George W. Bush to the SUPREME BEING some people refer to as God or Allah (although I know he is Core). This is the unit that not only make me want to PUKE, but to tear my inner organs inside-out while having sex with Saddam Hussein and a donkey named Bill thus drinking acid and beating myself in the head with a sledgehammer!!. THIS IS THE EPILEPTIC SEISURE OF THEM ALL and it deserves NOTHING BUT TOTAL AND COMPLETE DESTRUCTION. NO mercy will be given. This one goes STRAIGHT TO HELL, RIGHT WHERE IT BELONGS and will hopefully NEVER emerge from there. I hereby start JIHAD, THE HOLY WAR... ALL and EVERY super-overbalanced unit WILL be detained in the MONUMENT OF AGONY. NO PARDONS WILL BE ADMINISTERED !! ALL HAIL TO THE DARK !!