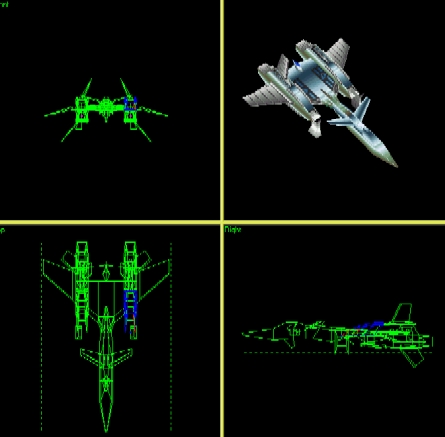 Buildpic: The picture is very generally somewhat messy and the merging is kinda flawed as the unit and background are simply too different.

Model: This unit got clearly too many faces. I know that most of them are seen, but a minor redesign could easily cut the face amount in half (into about 200 faces). Yes, Genghis Khan is a real criminal in this issue. The plane state looks very good, but it doesen't fit as a robot at all. You can't distinguish the head, hard to grasp where the weapons sit and so on and so forth. The legs are seen completely when it run, place them a bit higher up [1.5]. The texturing is very uncavedog and there is no CD 3D. There are also many parts that look very detailed and coole at close-up in the 3DO Builder, yet are worthless blobs in the game. There are waay too few logo textures [2]. There is no corpse, but hey... this is a plane after all, even through it use to run sometimes [1].

Script: This is a very complex script where the unit starts as a mech, standing on the ground. When a move order is issued, he starts to run (which he btw does very good despite obstacles in the way because this unit is such an ignorant prick that it doesen't care and run over them) and when a certain velocity (or rather time runned) is reached, he transforms and continue as a normal plane. When grounded, this unit can use it's third weapon (the Fido cannon) but when flying it got higher velocity. There are however many flaws here. First of all, you can walk over the water and feel like Jesus, for that I suggest to nick the sfx_occupy part of the [ Archangel ] script. Then comes the actual walking/running that isn't symmetric as the step with the right leg goes much faster when the unit makes a step with the left giving an odd feeling of lumping. Further, the groundplate always remains on ground level, which might look a bit odd over water, but completely weird over land as the unit seem to automatically dive and fly half a meter over the surface with the groundplate hovering next to it. Instead of automoving the body, you could move the groundplate to get improved results. Another thing with the strange groundplate is that the enemy actually fires on it and not on the unit in the air, giving a very certain feeling that something isn't right. They should aim on the mainwing piece instead. Finally, the biggest flaw is the combat in mech-form. It turns the weapon that seem to be hidden somewhere in the wings 180 degrees (if the target is in front of it), fires a shell and turns the wings back to the original position, then aims again and so on. If there are more than two units close, the cannon might not fire at all since the script is bothered by the question of what to aim and desperately tries to target all enemies. The missiles don't work unless the unit moves. I also think that this unit would feel better with an armoredstate where the mech have say 20% higher armor.

Balance: This unit costs a bit more than the Hawk (+34%), where it lended it's missiles. It got twice as much armor and slighter higher speed (+9%). But where the Hawk is stealth, this unit is supposed to be of better use when landed (which it's clearly not). No, this unit is underpowered and i don't think that clearing the ground combat bugs would be enough. Something more drastical is needed.

My score: A very interesting unit because if it's cross-over attempts with a kbot. I'd like to see this as the first investigation in the matter and want to beleive that the next generation will be even smoother. Heh, it's pretty cool that this unit got the exactly same score as the other unit the creator made (hint, he's big).