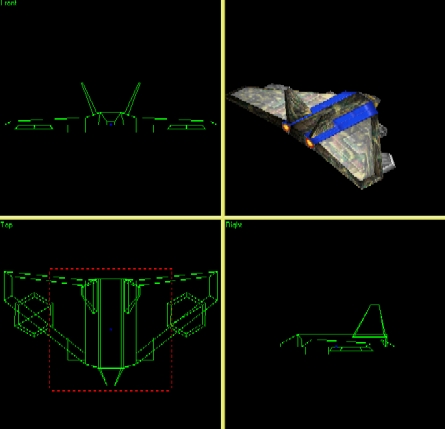 Re-revision: Read the complete review of the original version here.

Buildpic: Both the unit and background scores are full, but the merging is a bit flawed since the plane seem to lack contures and lying flat on the mountains behind it. The updated version wasn't changed

Model: The plane now looks like a real OTA plane with both proper model and texturing. So... yeah...

Balance: For newcomers, I have to tell you that this plane is the naval equivalent of the Rapier. It hovers in front of it's target and drops torpedoes on the unfortunate submarine or underwater construction. The targets are localised by the built-in sonar that has an extraordinary large range, which means that no more fussing around with Hunters and other sonar equipment is needed, since this unit can both find and exterminate the enemy (and thus critically effective due to the hovering attack compared to the sloow bomb runs of Titan, the Core torpedo bomber). I admit that I was a bit too harsh in the previous version, I apologise for that. As for now, the disadvantages compared with the Rapier are the costs (the Sontor is three times as expensive as the Rapier) and armor (where the Rapier have 5.5 times more armor, compared to the costs of course). The weapons are fairly equal (140 d/s for Sontor, 125 d/s for Rapier), which means that the Sontor is just about three times weaker in this area. And so, to everyone's general surprise, I consider that the sacrifices made are equal to the superioty that the built-in sonar means. I am once again sorry for the mistakes made in the previous review... I hope the final score will make it easier to forget.

My score: Heh... mind you, however that as we are closing in to the 10.0, I will be gradually more and more harsh because the unit that gets the ten have to be perfect and I will start bitching over the smallest, pettiest things. Just so you know... I won't give it away that easy. As for this unit, I'll keep it this time.