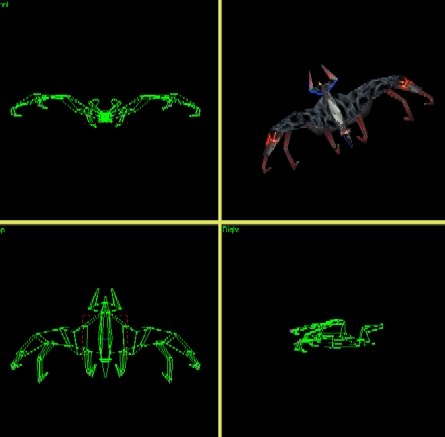 Revision: Read the complete review of the old version here. Also, I've forgotten to include that this unit also have two specialities: Landing in water and stealth approach (not shown on the radar, that is).

Buildpic: The unit looks nice and those little light on every tentacle looks cool. Full point here, no doubt [4]. The background is.. well.. it is a heaven and there is not much else there could be, so it would be unfair if you didn't get full point here either [3]. And of course, the merging... there is none, but it looks good anyway ; ) [3].

Model: No, I am not gonna let 140 faces on a too large vessel slip just like that and I don't know why I ever said that I liked the design because as it seems to me right now, it's one of the worst ever. Either I am really growing up from my young innocent newbie-age or I just wanted CANADA to have a nice score back then. To review this design with reopened eyes hurts pretty much because it's both un-OTA and also wasting faces as never before. This unit lacks a barrel roll script and will therefore never have to show it's underside. Bam, you got 50 less faces. The tentacles could all conscist of two sections instead of three and with three faces/tube instead of four or six. The main body, thus tail looks fine, however [2]. The texturing is one of the worst ever. The dark, grim, dead textures are not to exist in the bright, metallic TA world. Remember the organic creatures that were made by Cavedog. None of them was utterly dark and both had some kind of CD:3D effect, which this unit brutally lacks. A small logo spot is needed on the tip of each wing. The main body and tail looks pretty good, despite their awful surrounding. The red/black texture that is used on the claws is completely overabused for 3rd party units and should be exchanged as fast as it is possible [1]. The corpse is lacking, but that ain't a problem for planes [1].

Balance: The armor and weapon damage were decreased. The queston is: Is that enough? The answer is actually yes, and a wery brigt one too. The damage is now perfect for such unit compared to the Vamp/Hawk, there is just a little tweak that it still got a bit too much armor. Me thanks and bows for the exellent author responce.

My score: I don't know why I wrote the past message because I banished it from my TA folder the very next day.