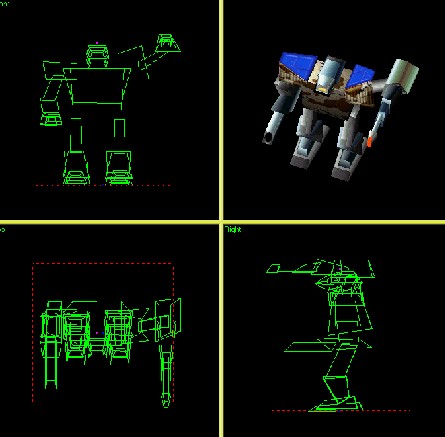 Model: The face count is pretty okay, although it could be even smaller if all unit limb parts were reduced to long triangles instead of cubes and so. The design is nice, much better than the first [3.5]. The texturing is much better since the last version and does now fully support CD:3D. The logo faces are placed properly I have no real complains [5]. The corpse is very nice... [1].

Script: The script is very good. The walking is nicely handled and the weapon alteration is cute, although I really should be faster.

Balance: This unit is very difficult to rate in it's present state. First of all, it got a shotgun that on close range will wipe away most of your foes (the closer, the better, this guy isn't really accurate), but if the closest target is longer away than so, it changes weapon and fires a much weaker, mut more accurate laser beam. It bugs me a lot... how I should best combine the two weapons to get out the d/s value closest to the truth? The closest connection I can make is with the Arm Maverick - the guy that holds the guns in mafioso style and is deadly up close. It costs 42% more, but then it does have a slight armor boost, faster legs + navigation and ahead of all, a weapon that makes sparking 400 damage/second on 320 range, which is far beyond this unit's capabilities. Able only to do around 300 d/s on a far shorter range plus the little, annoying laser that have a pretty long range, although embarrasing damage amount. But hey, the Mav cost alot more... Mixing in a group of Grunts in a standing army of Storms, Mortys or even Weasels is unthinkable, because of the low speed. They will also roam away from Cans and Sumos, so there are no real good unit that could support the Grunts in their marching meaning that they will have to walk on their own or arrive only to miss the party. This factor severely reduces the usebility of the unit. This unit is slightly underpowered and to cure it, you'd better improve the shotgun and slightly boost the laser too.

My score: This unit is a typical /right on/ man. The closer he gets to the enemy, the better fighter he is and that gives a pretty good strategic value. Due to the gross weapon spread, it is highly useful against large armies (which it shouldn't come close to due to the low armor) and large structures as solars and plants. We just found ourselves a solar buster.