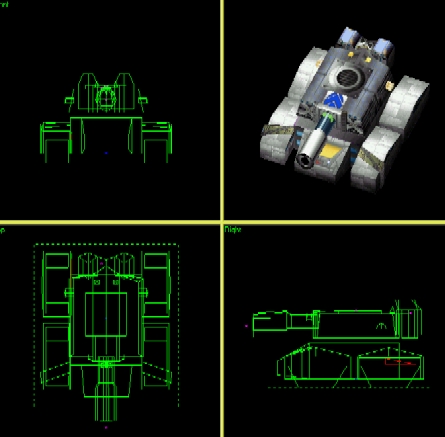 Buildpic: Much better... There are even some obstacles in the background.

Model: Lots and lots of faces have been removed, yet there are many more that could be. The turret is still mainly a box and I'd suggest moving it a snap back while increasing the lenght of the barrel much more [2.5]. The texturing has been improved greatly. Where the big fat blob were there is now a turret and the place that was occupied by a very ugly thing is now habited by a very nice looking barrel. I see pieces of CD 3D but it isn't fully completed yet as the backward facing slopes on the tracks could have a snap darker shading [4]. The corpse is fully acceptable [1].

Script: The recoil is still a bit too small. I think it might depend on the short barrel. Smoke comes out from the middle and the rear parts of the turret while the unit is reloading.

Balance: The damage has been improved so it is now fully possible to take out a plant in one shot and due to the lack of weapon limitations, you can also do so against an enemy commander. There are many upgrades made on this unit such as longer range, lower costs and higher armor. It is also a bit faster now. The only problem I find in this unit is the inability to fire full range and the constant hits of obstacles in the way because of the weapon type and TA engine limitations. Besides that (it might also just be me or that specific map), the unit is rather well balanced, although it wouldn't hurt if you bumped the range with another 150 units.

My score: It's getting better here... Renrutal said that the update would bump the score with at least 6 points in the final score. With the answers in my hand I can tell that it was in fact 6.5...