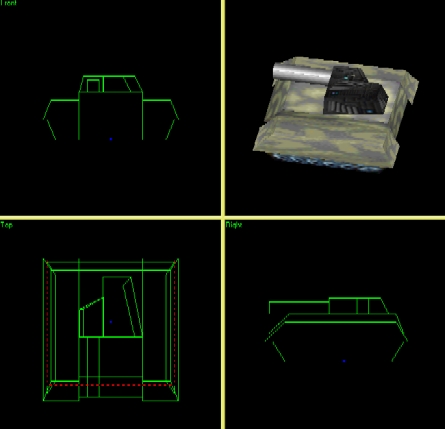 Buildpic: First off, this is the only unitpic I've ever seen (besides the Servation's) where the FUCKING flares haven't been removed! The angle is bad, and I think that the unit could have at least been zoomed in some more [0.5]. I think the backround is very poorly chosen and puts the 3DO Builder to shame [0.5]. The two don’t seem to fit well with each other [0.5]. Please redo the buildpic as it's very unappealing for a unit to have a shitty buildpic and that's mainly the reason people download the unit... if they like the bp.

Model: Among the first thing I noticed when looking at the model was that the barrel should be rotated 90 degrees so more faces can be removed. I spot a few usless faces that could be removed, as well as a spot where a face was removed that was needed [1]. Try to have more different textures, as well as add some logo textures. There are only 5 different texxes used throughout the whole model (flare not counted). Another note is that there is no CD:3D [2]. The corpse is acceptable [1].  One last thing, WHY THE FUCK DOES THIS MODEL LOOK EXACTLY THE SAME AS THE SEVERATION'S? Hmm… Maybe it was an attempt to improve it though.

Script: IT AIMS! THANK GOD! I was beginning to think that it was an edited Servation, well maybe it is? *cues spooky music*

Balance: This does 61 damage a second roughly. The range of this thing is 480. Wait I just noticed something.. The stats are all basically ripped off the Stumpy!! This unit is also stronger and has a longer range than it!! It's twice as strong as the Stumpy and the same costs! This makes the Stumpy completly obsolete!

My score: I have come to the conclusion that this is a copy of the SEVERATION with Stumpy stats and pumped up weapons! MAY IT BURN IN HELL!!! *readies comm's d-gun* FIRE!!!!