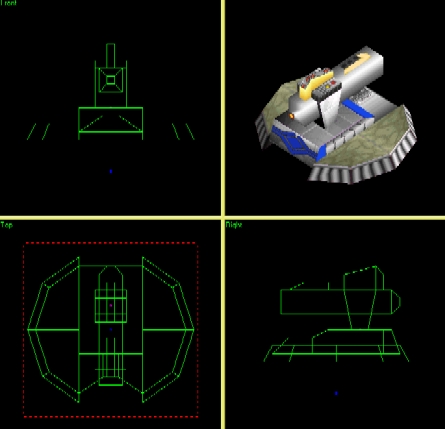 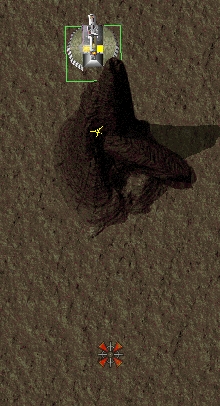 Buildpic: The barrel is very large on the picture and barrels of such size should be changed into a cylindrical shape because a box just doesn't look right [3]. The background looks quite nice except the fact that the water seem to be just as floating and moving as concrete. It seem to be a completely flat, untransparent area that is textured just like the bottom in pools use to look in a sunny day [1]. The picture is oddly illuminated. The scene seem to take place in the middle of the night with a giant flashlight instead of a sun. The light is too weak to be general thus the island (in the upper left corner) is darker the longer away from the unit it is. Covering it with a finger or a misfortunate squirrel improves the light settings of the picture, but not enough. The face on the end of the barrel is supposed to be glowing, but somehow it is shaded... [2].

Model: This is a rather inefficient design that somehow still manages to keep the face count low. While it wears several (the first six letter of that word are a pain to write) elements of OTA design, it doesn't look like the real thing for some reason. The tracks are improperly rounded up, the cannon is too detailed (that small thing on the barrel that on the screenshot looks just like a hole just have to go anyway). The body is directly attached to the tracks (while it really should be rounded up) and the front of it should be rounded up as well to create the kinda look of a cockpit in the front or sharpen until the same balance as for the Anaconda is reached. The flare is also way too large and should be placed a bit in front of the cannon rather than a bit in [2]. The texturing is overall very good, but one more look on the in-game screenshot above reveals that the shading on the tracks is a bit odd [4.5]. The corpse is nice [1].

Script: Standard aiming but far too small recoil for such a blast.

Balance: I have my reasons to believe that this little fella is so overpowerful that it sparks. Just the fact that it can shoot on longer distance than the Guardian is a problem, seeing as it costs eight times less. It also got twice as much armour compared to the costs. The weapon can not be stopped by any obstacle or shield in the game, meaning that it will always hit a stationary opponent on Metal Heck or Greenheaven or any other map with any hills or blocking walls providing that it is in range. It can shoot over the large walls in Great Divide or Core Prime Industrial Area without any problems at all. Dragon Teeth and corpses are completely ignored. Okay, only by the mentioned factors, this unit can be classed as overpowerful, but don't leave me yet for more is to come... You see this weapon is made on the same system as the D-gun, except that it does not explode when hitting ground, only units. This means that even the smallest Peewee is hit two times and a Hovercraft plant is hit twelve times, each hit being worth 40 points. The weapon does, as said not stop until reaching full range where it expires so it can bounce forever on all units standing in the way. It can first hit a Flash, then another Flash that stood behind the first one, then a Metal Extractor and two solars on a row and ending the fire streak with a Vehicle Plant, making between two and ten hits for every unit in the way. But now, we get to the really fun parts... The splash damage area of this weapon is a 356 pixels wide circle. To understand how large this circle is, build a Maverick, type +showranges in the console (accessed by Enter in case you didn't know), hold the mouse over the unit and press Shift. A red ring will appear around the unit with the label "Weapon1 Range". The splash damage of every touchdown of the GRX-714 weapon is that large (well, actually a bit larger). Every unit that happen to be within that area will be damaged (even construction airplanes that are building something or just planes that are passing by), meaning that the damage this unit makes is actually up to ten times as large as it appears on paper. If you look on the weapon stats up there somewhere, you will see that it does somewhere between 7 and 7200 damage/second. The 7 is when you bombard a lone Rocko or Thud or some other really small kbot in a completely empty area. 7200 is the absolute maximum of this weapon. In this version, it will make the maximum possible number of touchdowns and harm as many units as it can by splash damage. However, the real damage/second output of this unit lies somewhere between 21 and 100 and if compared to the Rocko, that does 20 damage/second on vastly shorter range (400 to 1400), you will probably get the point. This unit outpowers the Guardian anytime by any stats (range, armor, d/s, costs) and is also mobile and with hover talents. Rushing with a horde of Rockos suddenly seem strife as one of these units was enough to destroy an AI base without losing more than half the health, which would clearly be impossible even with two Mavericks (that together cost eight times more). This is a case for the Monument of Agony. No mercy !!