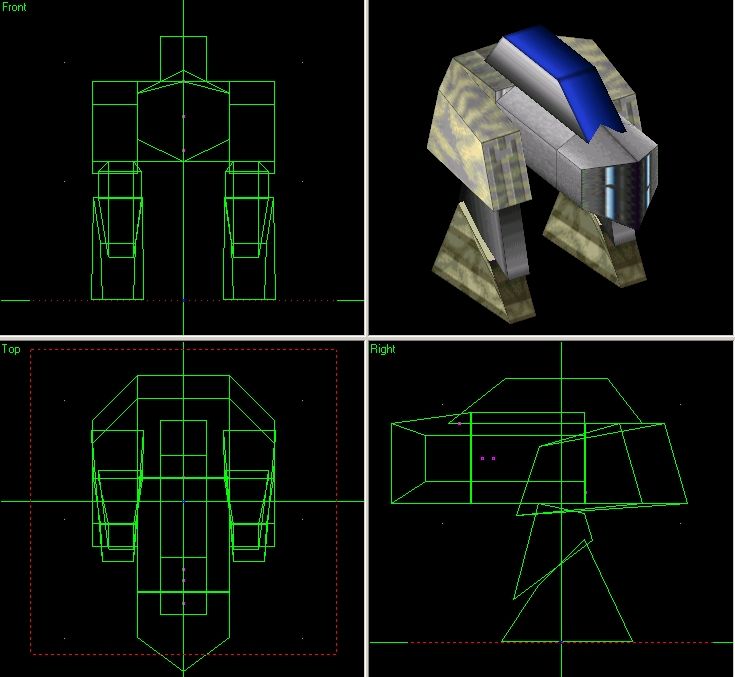 Buildpic: The unit is very well placed, but imo you could zoom in on it a tad more. [3.5] The background is very well done (Give us a tutorial! Now! :P) [3]. Merging is decent but the bottom of the feet blend in WAY too much with the mud (or whatever that is) [1.5].


Model: The model itself is beautiful. It looks to me very much like it could pass itself off among the Arm army, and it seems to be very well designed. It has 71 faces, which is a tad much for a level 1 unit but the number of moving parts justify it. Almost. There is one point (on the /neck" piece) that is not a face but is textured. I couldn't find any missing textures, but I'd like someone to check the dish pieces as I couldn't tell if those became visible in the animaition or not. Needs faces on the bottom of the feet. [3] Texturing is nice, there is even as much CD:3D as possible applied [5]. The corpse is nicely wrecked but none of the unneeded faces have been removed.. [0.5].

Script: Nice animations, but it suffers from the /disco syndrome" where it doesn't want to stop walking when it stops moving. Although, as the creator told me on IRC, it blends in with OTA perfectly :P Feet also move a tad too fast.

Balance: It's roughly half the cost of its level two and less perverted Cavedog sibling, the Marky. If you apply that same ratio to the radar ranges, though, the Willie wins by a spectacular 16 units. However, the armor is far less than that ratio so it more or less evens out. It is also slightly faster than the marky. I'm going to give you a 9.5 because it's against my principles to award a 10 on a first review.

My score: My Score: Too small to appreciate the animations, and that name really isn't my thing. If you want a level one radar unit though, get this unit (and change the name so you aren't bothered) now.