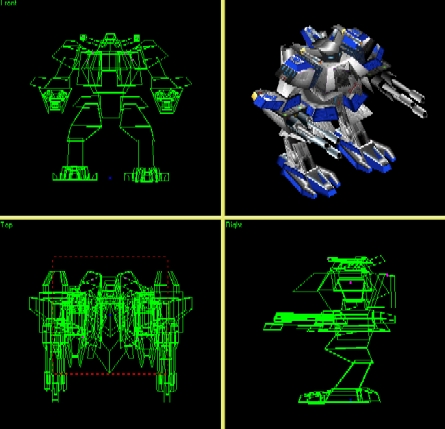 Update: Several problems occured with the previous review. First of all the Orcone got much more armor than stated above, but somehow I overlooked the Damagemodifier tag that gave Orco a 250% armor boost and then made some really really weird comparisons. And what worse is, I wasn't suffering of lack of sleep as I use to when I make reviews (maybe that's why) and I can't been drunk either (possibly high on Coke, but that's it). I better not listen to heavy metal when I review superunits...

Model: This model get the big fat stamp of "Face crime Class II" in the face for while being generally a nice model, it is over-duper uncleared. It got faces sticking in all directions, even in the forbidden one. Especially in the forbidden one... The face count of the unit isn't anything really special, but these useless faces drives me mad. The head, for example that take up almost as many faces as one of the legs (and guess what is seem most in the game). The head laser is one of the ugliest turrets I've seen, ouclassed only by Ziggo. I mean look at Mr. Krog's bullseye... it really looks like an oversized particle accelerator mounted on a torso, always searching for targets, always ready to kill. The serial model of the gun that the Orcone has the big unfortunate to have, looks just as deadly as those Mickey Mouse hats they sell at Disney theme parks. I mean it's just as comparing a NYPD shotgun with a sack of mutated potatoes. Anyway, I want it gone and never to return. If the creator wants, I can provide two ways of modelling that could make it all look at least only bad [2]. The texturing is outright awful. The amount of CD:3D is almost laughable. There is close to none variation of textures besides different versions of grey and this overabusing of logo colors. And if compared with it's bigger brother: Karganeth, the textures are oumost messy. I can tell you all, that this looks so unclassy in the game, it almost hurts, especially the head [1]. The corpse is very awfully wrecked. It's just as likely for a monster to lie in such way as for a human to stand up when dead. The texturing is also flawed and no faces on the underside have been removed [0.5].

Script: The walking looks acceptable, only with a sudden jack on the feet once each step. The recoil is nice, but it is really a shame that the barrel carriers don't rotate so all the barrels takes turn to be the longest ones (being pushed forward, that is). The shield is magnificent. It sparks from time to time when nothing happens, but when the unit is hit, it lightens up, flashes for a second and then disappear again.

Balance: Comparing the Orcone to the krogoth, we get that the green-blob-gun is absolutely not equal to Krogs' Bullseye-helmet sine the bullseye is both weaker and have shorter range (700 range, 625 d/s). The Orcone laser can not be transformed into Kay's Gauss guns, even with a bit will (300 range and 300 d/s), but both missiles actually seem to be equal because while the Krog's missiles are a whole lot weaker, they can actually hit aircraft and they don't overshoot if the target is within two screens range. However, the last review did not mention that the splash area of these Anthrax (!) rockets is three times larger than the Krog's, meaning that if they hit a crowded area, more units will be damaged. Further on the loop, the Orcone have only 246% of the armor Mr. K posesses. And the best of all... Orcone cost twice as much. This update have seriously bumbed the balance rating of the unit, but my opinions stands that it is underpowered compared to the Krogoth. If under any condition two Krogs meet an Orcone in a fight, they would be widely superior. A krogoth with the target within all the weapon ranges is able to deal out totally 1015 damage units every second. An orcone manages to push only 1322. I've made a small comparison here on paper what would happen if such battle really took place. I assume in my calculations that the short range of Krog's Gauss cannons is equal to the giant overshooting of Orcone's missiles. 21.2 seconds after the start of battle, the Orcone is a smoking wreck. Under the 21.2 seconds needed to kill it, it manages to do 28032 damage to one of the Krogs and the armor ammount of the Krog is funny enough 29500. This means that if you are lucky enough, you can walk in with two krogs and walk out with two krogs (although one of them will smoke so much, that Greenpeace will commence sanctions).

My score: Burn, you unbalanced, underpowerful, megasized, superexpensive, dirtyfaced and badly textured smeghead. And why do the cannons with a diametre of x shoot out green blobs with diametre 3x? Does not compute...