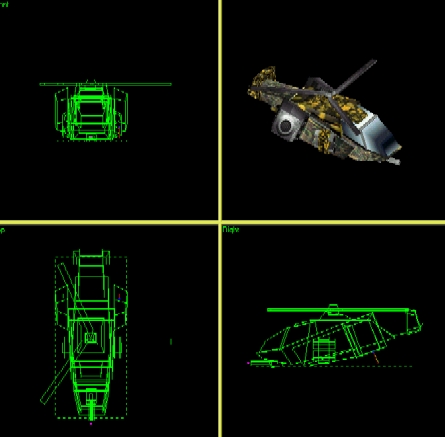 Buildpic: The angle could be more dramatic and rotor spinning effects should be added to make it look good. The rear parts of the unit are just a dark mess where you only can see the siluethe and not any actual details. Due to the shading of unit, it also looks much more slick and not the actual mumble bee that it looks like in-game [2.5]. The background on the other hand is very cool with clouds and something blue beneath [3]. I've seen better mixing... The unit is waay too dark in comparison to the clouds in the background and the shading of the unit says that the light source is a spotligt forward above (seen in the unit's direction) the size of a monitor screen, maybe smaller and definitely not the sun or any alike [0.5].

Model: First of all, the model is a bit too large in game, please resize it to at least 75 % of current size. Anyway. the concept of a helicopter is usually a very slick body with large rotors, with exception for the very light helicopters that are just an engine, a couple pedals and a joystic. All within with a laminated glass bulb. Anyway, ever seen the Chinhook? It ain't got a lot of body, but two massive rotors and this unit is pretty much the same except that this rotor is just enough to lift it's own engine and two pounds sugar. Also, the tail that is there to stop the helicopter from spinning is usually long wit either a rotor at the end or a very big screen. Your tail, on the other hand is short, fat and have useless weight at the end that in the real reality would force the craft to in best case, slowly falling backwards. Another useless detail is that the engines are squarish and would never be able to lift anything at all. Finally, this thing got a hell of alot of faces. Well, at least the jet engines are placed very good and the body main construction is done properly (but the missile launchers are too small and the barrels could be longer, that wouldn't hurt) [1]. The texturing, on the other hand, alot better and do I dare to say good? No I don't because the logo textures are completely missing. I tried to find them, but failed somehow [3]. Full corpse point, just like for all planes.

Script: Some standard animation and rotor movement. Also a cool effect of the jet engines. BTW, double the speed of the rotor spinning when in flight and never make it stop-spin when landed (use half of the current flight speed).

Balance: This unit seem to have a good ammount of armor compared to the Brawler. Double costs: double armor. It's also got faster acceleration and turns, but there the good part is over because this unit is horribly underpowered. The brawler is faster and does almost as much damage as the Tempest (73 to 93). It could be possibly equalized a bit when you count in that the Magnum have radar (and alot of it) and the machine gun hits it's targets with higher security than the emg, but still... I suggest to increase the damage of the single shot from 9 to 15.