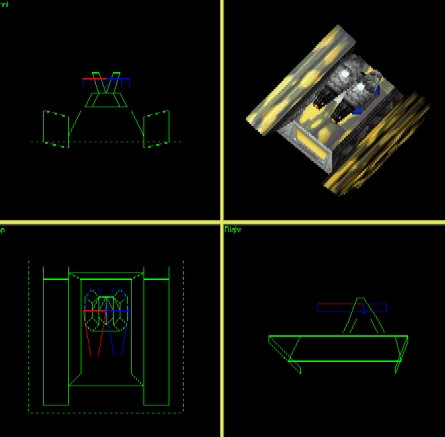 Buildpic: The background is very bad and lacks proper illumination. The cannons turned towards the camera get messed up... Unit 3, Background 1, Merging 3.

Model: As usual, there are the four faces on the underside of the track that can go poof and no one will miss them. Larger parts of the turret (the arms that hold the barrels) are equally needed and besides the blinking texture they can be removed completely. The flare is too thick, it's a cannon flare. The tracks are poorly modeled, looking squarish and stupid in the game. The barrels could have been longer or having some actual barrels sticking out. The actual design has been more or less overused as at least half of all the tanks out there has this form, inspiration is essential, check [ this ] file if you're out of it. The face count is very low [2]. The texturing is Cavedog-aligned, but that is the only positive fact. The detail amount on the tracks (especially on the sides) and body is brutally low and the entire unit looks like a yellow-black dude with something black on top. Messy with other words.. Compare with the Instigator (hint: it got style). The barrels are awfully textured as there are no black barrels in the game at all. The logo textures are present, but really well hidden under the barrels, so you have no real chance seeing them unless climbing a 20 degree slope, which I see in the .fbi file that it can not. Thumbs down [1]. Corpse is nice, make logos gone [1].

Balance: This unit is slightly overpowerful as it got pretty much the same stats as the Instigator all over (originality failure alert!) while having 10 units longer range and one d/s more while costing a lot less energy. NO MORE OTA STATS RIPPING! OBLITERATE HIM!

My score: I really don't like this unit, for the purpose of unit making is to diversify, to fill out the gaps, to bring forth new tactics. This unit does not as it is very much the exact same thing as it's brother Instigator with differences lesser than one percent in most areas. This is just your ordinary Gator that shoots faster... Yeah, by copy-pasting the stats from a CD unit, you'll probably get a high balance score, but I can directly tell that it doesn't deserve the time to download.