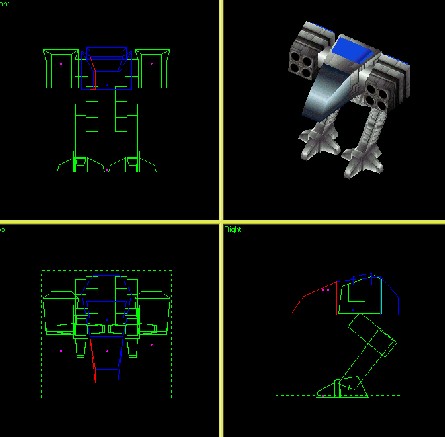 Buildpic: The unit possesses an elegant pose but the little border the picture contains don\'t fit the CD style at all and I can guarantee that this boy is pretty bullied in the Core Kbot plant [2]. The background would be very nice if only the ground had the same general color as the mountains three clicks away. At the moment, it looks very unnatural for the dark yellow hills to change into brown just over a pixel [1.5]. The merging does look pretty good if watching the shadow effects (one of the fewer cases where the unit cast shadow on itself, actually) but then the feet seem to have zero contact with the ground for some odd reason [2].

Model: The model itself looks very much like a large mech got trapped inside a shrink beam or maybe constructed of spare parts to serve as a pet for Fred the Krogoth. No underside faces have been removed and that's just a shame because this unit have to do pretty advanced stunts like lying on back to show them (which it never does, thus making the faces obsolete) + that there are several modelling mistakes that can save another bunch of faces. The launchers should have been unsymmetric and mirrored [2]. The texturing is not only lacking CD:3D, it is also very odd in general. The launchers have a very unfitting texture and the legs are all covered in the same one (not even turned to fit in somehow) [2]. The corpse i looking nice despite the face excess... [1].