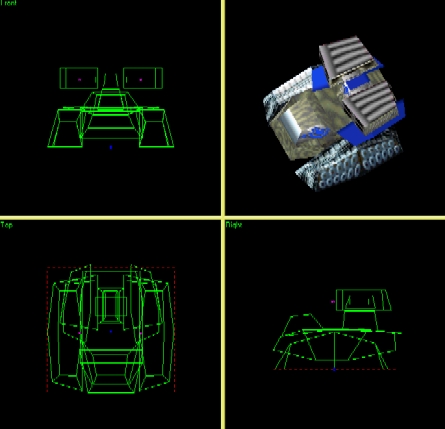 Buildpic: The model is way too low-poly in this picture. I can\'t help but being repulsed by the deformed tracks that don\'t look like tracks at all. They seem to be rather long dead statues carved out of stone than any sort of moving propulsion system made of metal. It looks to me like the unit is a hovering vessel that on the pic is sitting in the refuelling bay or permanently stuck between some obstacles in the empty desert. The launchers are also severely four-edged, which they generally should not be [1]. The background is acceptable but the clouds that to me seem completely unfitting in the picture and the ground having strangely low resolution the closer it gets to the camera [2]. The merging is also semi-accepted. While on the first look, it might seem that this unit is standing in the middle of painted desert or something alike, a closer look reveals no kind of connection between the unit and the ground. No shadow, different resolutions and misleading texture shade mess it all up completely [1].

Model: The face count is pretty steep for a unit of this sort and I can think of many many different places where the unit could be effectivized in this area. The bent-up tracks for example that require twice as many faces than usual could furtherly be made of one single cube, since tracks are always square (not rounded up as seen from the above view) as well as in real and in the OTA world. The cockpit is totally useless. What is it there for? The small turret that holds the launchers could be pretty cut too. The launchers are just straight out ugly... too large and sitting on a too small turret. I want them completely scrapped and remodelled into something better. I have no straight out idea for a new design right now, so I can't show what I mean, but I'm damn sure it can be improved [2]. The texturing is really really nice, with CD:3D and everything. However there is one flaw: This unit is textured by the same theme as the Raider and Instigator, yet is built in the Arm Vehicle Plant. The reasons are completely unknown, but the fact is that you could have gained a nice bonus on this score if you either textured it right or placed it into the proper plant. The launchers should however be retextured in case you keep them because they look so bad inside the game that I lack proper words for it [2.5]. The corpse is fine [1].

Balance: I'm gonna make myself short, in every field but the weapon, this unit is completely equal to the Arm Samson. No, the stats are not ripped off, but they are very close and being a margin higher here or margin lower there, so in the end it equals up. It all ends with the weapon. This unit has much shorter range (400, compared to Samson's 600) while having just a snap higher damage/second ratio (20 compared to Samson's 16). The range in this game is more or less everything and such a dramatic range decrease should be favoured by some other thing if the d/s increase is this low. Thus we must consider that the Samson does double damage to all (OTA) aircrafts and while it have some troubles hitting such with it's relatively short range, the Stinger is more or less screwed in this area. Don't expect it to nail any more planes than a Rocko do. Since the unit lacks any of those "other things" like increased speed or armor bonus to make up for it, I have no choice, but to get out my "underbalanced" stamp. My suggestion for this unit is either boost the speed to about 2.3 or increase the armor to 750. It itches me to suggest a cost decrease, but in this perticular case, I doubt it would do any good.

My score: I find the absence of tactic diversity almost offensive.