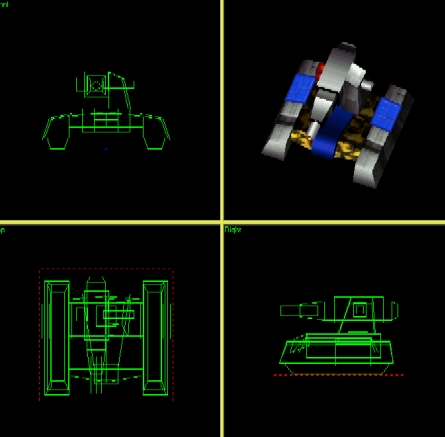 Buildpic: The unit is more gray than it should if you compare with the model shot. I am also a bit mispleased with the angle (both the camera angle and the angle of the unit compared to the background) because the unit looks very... dead. A sligtly larger zoom in wouldn\'t hurt [2]. The background is very interesting because I\'ve never really seen a Core Prime background but is nevertheless utterly boring in a odd kind of way [2]. The merging is strange... the shadown on the ground is soft, but the shades on relative parts of the unit are very sharp and pitch black stand next to snow white without any kind of gray neutral zone in between. The illumination is a bit diffuse since for example the right side of the tracks and the underside of the cannon (that big round thing on the pic) are in sharp contrast [1.5]

Script: I still don't get how the unit knows that it is hit by a EMG shell, but I can assure you that it actually works and it looks good too. When in blocking mode, it gains a lot of armor while you see a small shield flash around it.

Balance: As far as I remember it, this unit was resistant against EMG shots and Bertha/Timmy fire. I can assure you that so is the case in the first alternative, but I never had the opportunity to test the other one and despite searching in the script, I didn't find anything there either [edit, I think I know how they done it now... impressive]. This is a special case and I had a very hard time trying to compare this unit, so please correct me if I'm wrong. Now, it cost rather little metal, but an insane ammount of energy to make up for the resistance while only equipped with a rather weak short-range laser weapon. I wonder how often level 2 units encounter Flashes, I mean aren't they obsolete after 25 minutes play when you got mind-breaking ammounts of Missile Towers, so when this unit finally comes to play, the main enemy of it is long gone and exchanged by bigger better? At that time, the tiny laser of it is close to useless (heck, two Storms would disable this unit with ease despite the fact that they cost less). Yea, I still get raided by Flashes in the late parts of the game sometimes by some random lamers, but at that point my defenses are so strong that the planned assault is more of a pathetic suicide mission. I would apppreciate it very much if this unit would be cut by around 130 Metal and say 800 armor and placed in the level 1 vehicle plant where it would have much bigger tactical usefullness. Currently, it's very underpowered...