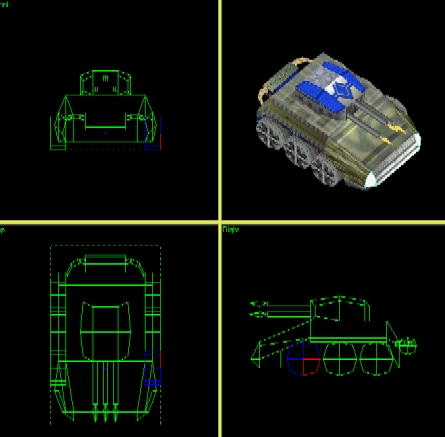 Buildpic: The angle could be better. I'd prefer to see this unit slightly from above, just like almost all the other pics [3], but the rest looks pretty good even though the terrain is rather boring with no obstacles or whatsoever [2]. The merging is also a bit suspicious since the front of the tank looks lighter than the rest (although, they eye clearly says that it shouldn't) but it is actually the textures that does this effect, so you won't get lower score for that [3].

Model: First of all, this model is a bit too large in-game, please resize to 80-85 % of current size. This model looks very TA-ish and merges very good with the OTA tanks. Now, the backdraw is that there are unnecessary many faces. First thing that cathes my attention are the pipes at the back that uses up 18 faces, whereof 14 are just wasted. Then in the edge of the body shell there is a row of faces that are either facing down or too small to ever be seen in-game. I could count to 11 that is more than 25 % of the face count for the whole body (not turret or wheels). Why are faces needed for the underside of the barrel or that very high poly box in the back (that could be exchanged into something with half the face count and still the same look. The wheels have very many faces, but it doesn't bother me so much because there is no way to get less [2.5]. The texturing is done according to the OTA Stumpy style and is done rather good actually. But I really miss the shading that all OTA units have (that gives them a more 3D look) where the front left corner have light textures and the opposite corner have dark ones. Extract some models and see what I mean. The faces just above and beneath the Arm logo don't fit and the green textures seem to have been chosen a bid randomly but still, it's an overall good work [4]. The corpse is very good, but perhaps the turret should have a different texture...

Script: The model lacks a sleeve and therefore, all barrels are aimed separately in the x-axis. The wheels look very good.

Balance: This unit is slightly overpowered. It does less damage / second than the Stumpy (21 to 33) but on much longer range. It got less armor than the Stumpy, but it also costs a bit less while being 50 % faster. If you just lower the armor with 150 or the weapon to 18/shot, the unit would actually get a really interesting strategy value.

My score: I like lvl1 units that are well-made. This one is not far from that position.