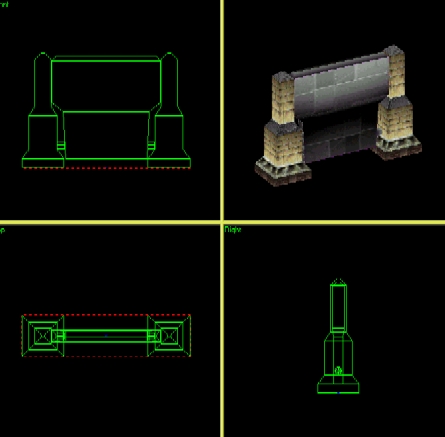 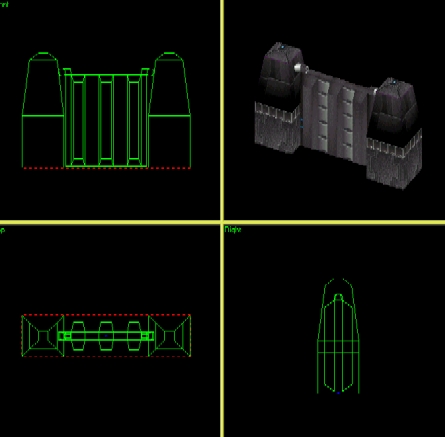 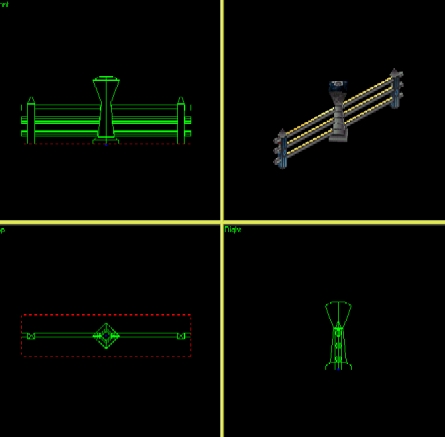 Buildpic: Right, all of the buildpics avaible in this pack are in wrong angles compared to the game (they are turned either 45 or -45 degrees while being 0 or 90 in game) and to the ground [1]. The background is same flat, boring and emotionless terrain on all of them [1]. The merging is almost non-existant as the small shadows that have been put on the pic are hardly compatble with the illumintaion of different parts of the unit itself [1].

Model: First thing I noticed was the facecount and my god, that was an extreme facecount... I mean faces were hidden here and there and sometimes even to small for a Flea to notice, but they have nevertheless been textured and considered as acceptable. The face ammounts on the bigger walls are almost acceptable (well, not by me, but maybe most of you others) while the cheaper models are almost killing with doubled paralel pipes that are textured on the underside. The bigger wall models are good, especially the Core ones (while the Arm version contains suspicious flaws in the construction) but what they all really lack is possible connection to adjacent walls, unlike the interesting formation that Uberhack offers you [1]. The texturing is completely fine by my taste... even kinda interesting when it comes to the bigger ones but nothing really special on the lesser [4]. The corpses are all there and working, despite me wondering what features need corpses for... [1].

Script: Hah! Scripting for completely dead walls... I'd love to see someone try to someday.

Balance: The lesser walls are in fact very underpowerful compared to the Dragon teeth... While a DT costs 10 metal to make, it conscists of a duralloy worth 4000 damage points while the wall that costs five times the DT costs while being four times longer in either direction is only worth 3875 for the entire row. I don't know what you would do, but I would go for the DT in that case, even if it costed me three more seconds to set up the needed route. Despite the brutality of the larger walls one might experience in the game, they are worth less than the fortification walls that Cavedog kindly provided us with. A row of four OTA adv. shelters are worth 108M while giving a protection rate of about 6000 armor points depending on the side while the TADD productions pushes up the price to a mindbreaking 500 for the same size while giving away a purty defense of 10000. Do a bit math for yourselves...

My score: Nah, while being underpowered, I'm sure these ladies are fun to put around your base just for the sake of it when playing against the AI. I doubt it would complain... As I feel now, this load is going to my backup folder, but I might change my mind some day to just toy around a bit.