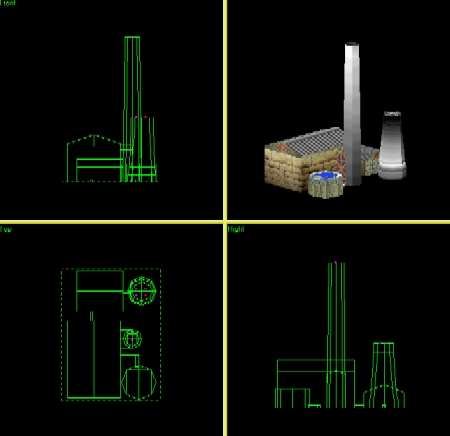 Buildpic: The unit itself seems to be pretty decent, but it could be sharper, and it could definitely be better detailed [2.5]. The background is excellent [3], but the merging has something to be desired...the shadow is way too small for the structure, the only real shadow from it coming from the smokestack. On top of that, there are no lighting effects on the right smokestack, or the left sides of the buildings...? Maybe because it's a cloudy day (at least this is what the background is trying to tell me), but even then, there would still be lighting effects... o_O [0]

Model: This model has a fairly decent amount of faces, but the design of it looks like a World War II powerplant, almost like something that the Axis & Allies mod would love to have. It's very original, and quite interesting...But OTAish? Uhh...Nope. It also sort of bugs me how the smokestack is not sticking straight out of the building, but instead to the side. As well, for it's power output, it should have more than one smokestack [2]! Texturing however...some I love to bits, and how it looks like a WWII power plant. But it's not OTAish!!! As well, the texturing on the main stack needs something different, and the Core logo on that circular thingy that seems to have no purpose but to take up faces, totally doesn't fit with the rest of the texturing around it! It should at least have a darker Core logo, or just something plain...[2.5]. The corpse is pretty decent, but the texturing totally ruins it. I'll give a half point, but only because it looks pretty well wrecked model wise [0.5].

Balance: AAAAARRRRRRRGGGGGHHHHHH!!!!!!! WHAT ON EARTH ARE YOU DOING IN THE LEVEL ONE FACTORY?!!! *Ahem* ...had to get that out of my system...yes... Ok, this unit makes an astonishing 525 units of energy, compared to our level one friend, the Geothermal plant, which makes 250, and has to be built on Geothermal vents! This would make the other Level 1 powerplants SO OBSOLETE that they would of probably NEVER been invented, because there would of never been a shortage of Oil! For cripes sake...I also did some balancing checks, and this thing churns out slightly more energy per tick than the FUSION plant in terms of cost in energy, AND metal! This thing needs to cost more to be adiquately balanced...as well as being level two.

My score: As much as I hate to say this, I like this unit, but I assure you, it's not because it's overbalanced and cheap. I like it because it makes the AI work twice as efficiently with these plants, making AI battles extremely difficult. Otherwise I probably wouldn't use them (and I rarely build them anyway), but they're good AI boosters. Other than that, there isn't much that makes this unit THAT good.

Another thing that bugs me is that this unit (and it's partner, the Arm Coal plant, included in this ufo, but to be reviewed seperately) is that they use Coal and Oil. Wouldn't they be used up EON'S ago? Heck, you've seen fuel prices in the world, so why would there be those kind of power plants? Very unrealistic...