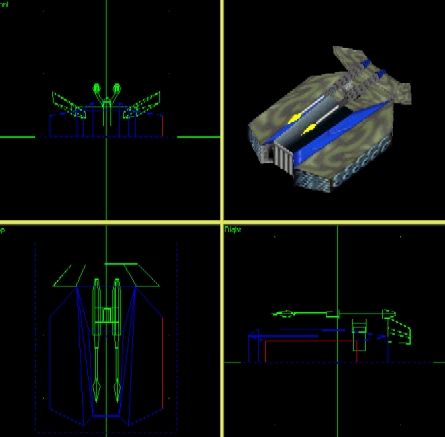 Buildpic: First of all, I don't really get why thre is a big sphere in the middle of the tank because the model lacks proper curves and texturing for it. I wouldn't protest against an elevated area in the middle of the unit, but a sphere just make me wonder. The laser cannons are also too dark... [2]. The background is very nice [3], but the merging is not flawless. Look at the light in the mist around the mountains, but the unit seem to be illuminated from the front. There are however nice shading effects involved [2].

Model: First of all, guess what I saw? That is correct, a lot and once again a lot of hidden, useless and stupid annoying faces everywhere. I have (once again) taken the liberty to retexture the [ model ], and coloring all faces that could be excluded in red color. Take a [ look ] for yourselves from underside perspective... Now the concept is rather nice, but the barrels are too small and the groundplate is merged with the body ( which I'm not especially fond of since it's much harder to edit) and the barrels with the gun (that eliminates all chances of recoil animation). The /Turret/ part is just a lame cube that is so small that it is never seen in-game. I have exchanged it with an empty face. The cannon /arms" (that V thing) is mostly useless and should be cut down to two faces and in best case exchanged with a realistic machine-gun-turret look [1]. The texturing couldn't been much worse, since many alike textures are used. There is a shortage of variation (and by the way the cavedog 3D shading) and while the barrels and some textures are turned wrong, other unit parts have very odd and bad textures (i'm talking about the dark dark things that the barrels themselves sit in). The dark logo texturing on the rear end of the cannon uh... (whatever those things are called) is just as much distractive as amusing. Why even bother to create them? [1.5]. And then we got... the... uh... cooorpsee... (this doesen't sound good, does it?). The corpse is equipped with three times the face count of the original unit and while 90% of the 3rd party units out there have at least just as many faces, you certainly try to reverse everything. And not all, every bloody face is textured with the same friggin texture (the first in the corpse folder, btw). Ful corpse point? BWAH !

Script: Standard aiming without a trace of recoil...

Balance: Uh-oh... It cost 10 metal more than the Instigator (you know that Core tank that is completely worthless), has 250 less armor (40% less), but makes twice as much damage over longer range while it moves 50% faster. I can accept that this unit could be a bit more powerful than the gator, but it is too much. Drop the spped to 2.3 and top the cost with 25 metal (or reduce the damage/shot from 25 to 18 istead of cutting in the recources needed).

My score: Jettison unit ! [airlock opens and unit flies away into the empty space] Neeext !