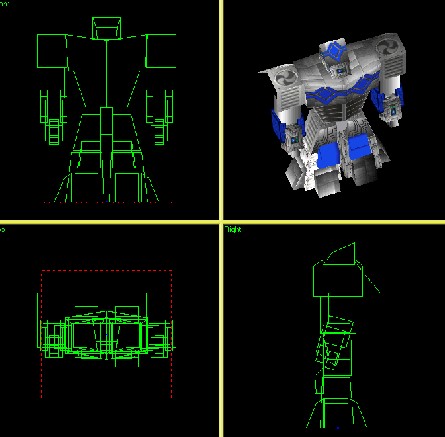 Buildpic: The picture is too dark and too unsharp following by the fact that this unit lacks colors as never before. It also looks a bit messy with the somewhat unnatural pose (especially on behalf of it's right leg). There is also a border on the picture that all [ CA ] - manufactured units seem to have. I will not complain about it this time, because it is less noticeable than usual [1]. The backround is nice [3]. The merging is acceptable and would be very good if it wasn't for the left leg [2].

Model: This unit has been through a face cleanup of lower quality (meaning that all the faces pointing directly down have been removed) but there are far more that could have been excluded and smaller rebuildings of the model could cut another dozen. The guns are doublebarreled, requesting larger pieces so they actually can be see in-game. The model feels very squarish, like a walking cube... but hey, then I suddenly remember the Can [2.5]. The texturing is not acceptable. It is clearly too boring and too repetive for a level 2 kbot (the OTA equivalents of such are pretty fancy). There is simple shading on the unit and most of the faces have been turned in to fit somehow, but the CD:3D is generally lacking and the team colors have clearly been abused [1.5]. The corpse is fine, but if I were you, I would turn one arm to point forward [1].

Script: The walking is all nice. Aiming functional. Modest recoil.

Balance: The Arm Maverick costs 62 M more than the Fury and got for that a little armor boost, while the Fury is a bit faster (even though it's actually larger than the Mav in-game). The real difference lies in the weapons... The range of the Fury is, as you can see higher up is 380 and the total output is 250 d/s. The harder Mav does on a snap shorter range (340) spew forth no less than 400 damage points a second. This is underpowerful and will probably never be used in a game, seing as the better equipped Mav will simply outrule it using the /survival of the fittest" technique. My suggestion is to either boost the range to 430, increase the d/s to 320 square or simply drop the costs to 380.

My score: Why is there another Maverick wannabe for Arm. I mean, Arm of all sides allready haves a Mav and have exactly no need for another one. I'm hard to please... Jettison unit !