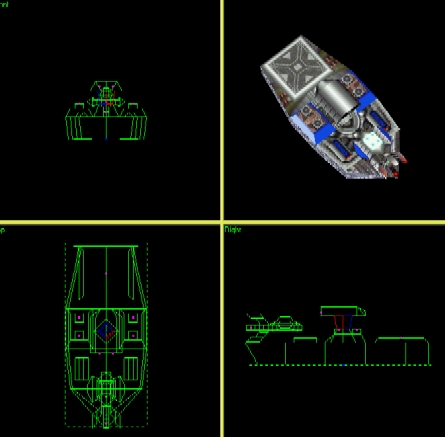 Buildpic: Nice pic, but it looks a bit too messy for full score.

Model: This model contains no connection to any OTA ship at all. It is flatter in front than in the rear, it is rounded up (and thus completely odd). The body got some useless faces, but the real criminals are the front turret and the rotating barrel that together contains just as many faces as the hull without any real detail level. The only thing that is seen in-game is that something spins and something flashes with those white-to-blue-to-black-and-back textures that some people adore too much. The highlighted part on the screenshot should be killed as it is completely useless. The missile turret might also look better with a more OTA design (I'm thinking of the Arm MT) [1]. The texturing is quite ugly. The ship can be divided into four blocks, each of whom is textured with a different style. They might look good by themselves (besides the part between the missile launcher and the turret in the front - that part sucks), but when combined, they look like something coming straight out a high hippie's mind. The CD:3D is actually present in the missile section and on the sides, but the overall lack of it on the rest of the ship is disturbing [1]. The corpse is nice, fix the pad texturing or perish [1].

Script: The script functions as it should without being a specially advanced one, but I lack elevation of the primary missile tower. It would look cooler if it would fold down when inactive.

Balance: The purpose of this unit is to combine the best from the worlds of carriers and battleships. It costs 2K Metal more than the Millennium, but while the first two weapons have the roughly same range, the d/s ratio tells us that the Neptune would not have a chance in case of eventual confrontation with one. Of course, there is a third, short range weapon that equalizes it a bit, but it is far from enough. However, this unit features a landing pad and +350E every tick, but even counting that, there remains a gap of about 1200 Metal measured by Cavedog scale. When thinking rationally and by multiplayer strategy, most of the cost of the Colossus - the Arm carrier - comes from the extreme energy producing onboard that is is only superceded by wind and tidal generators on certain maps. Yes, it beats the Fusion power plant in efficiency, in armor (with a factor of four) and mobility, thus it is equipped with two air repair pads and a lesser radar. The Neptune unit is therefore obsolete to the max... who wants a ship that costs 6K Metal and is weaker than another, cheaper ship? If you want energy, you build a Colossus. If you want firepower, you pump a Cruiser.

My score: I have always been against merging of different settings because it denies the actual essence of Total Annihilation. If you want a cannon against incoming ground units, you build one. If you are pested by visits from the air, you build Missile Towers. Depending on the situation, there might be many cannons and many MTs or just endless plains of MTs (since the M-Tower is one of the most efficient units in the game). TA is like Lego, if you need some special defense, you take more such bricks to build your castle. Where is the fun of taking three complete designed Lego blocks and construct a big house? The fun is to build and that is what require so much skill in TA, please don't ruin it.