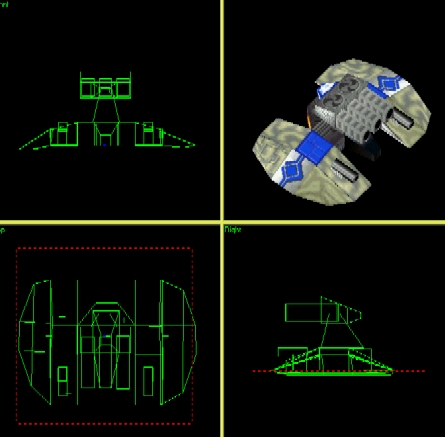 Buildpic: First of all, the buildpic in the game isn't that corny because I was forced to resize a 64x64 buildpic but it is nevertheless utterly bad. There is some strange light on the picture that makes sure that all reviewers wathing it get disturbed and die. There is no shading and the barrels are hardly distinguisable from each other [2]. The background can not be worse. At least the boring one-color layer could be shaded with two colors [0]. The merging with what, I wonder. Even I can merge perfectly with completely nothing... [0].

Model: The model is waay too wide and slightly too large. The massive cannons in the front should according to gravity overturn the entire unit and smash into the ground with a sufficient velocity to scare the shit out of any unlucky A.K. that happen to live nearby. They are also suspended way too high up increasing the feeling of an accident that will happen any second. There are two cannons on each wing that are completely useless as their only assignments beside gathering dust and giving the cannon higher up moral support conscist of making fun of themselves and take up faces. There are two gaps on the wings that often let the player view straight through the body onto the ground beneath. Maybe that is a feature that allouds very small units to run under the body and glance on the surroundings through small windows. The design is awful to tell the truth, holding nothing of either value or glory, making a very good example how a hovercraft should not look. The front inner wing corners could be dragged forward a bit to create at least some determination in this cubic mind. Another thing that didn't I failed to avoid not noticing is that the unit is made of rubber, plastics, mercury or some other semi-floating materials, because all the model grid points float around very much as they please (just look on the 3DO screenshot). And finally, the groundplate should be tightened, flares should be largened and the barrels should be prolonged (prolonged exposure? No, they should be longer). I see that I have wasted too much space allready, so I won't start wih my face-criminal talking [0]. The texturing is semi-acceptabe, containing average arm hovercraft shades on the wings, but providing some of the ugliest barrels i've ever seen. The logo coloring is very nice through (but the upside-down arm logotype). I'm not going to ask where the Cavedog 3D went [1]. The corpse will not be accepted by some reasons that should be pretty obvious (one model, one texture) [0].

Script: Heh, I laughed through the entire firing sequence. The script does alterate between the three barrels, but in two of three occasions one barrel recoil and another shows the flare (while a third actually shoots the weapon). The best cannon team work I've ever seen. Another thing is that all the shots are fired from one flare. A walk through the script revealed that the recoil part is in fact correctly written so the errors are spawned in the model. The turret aims a bit too slow, but the rest of the script seems fine.

Balance: I think that this unit is actually pretty balanced and follows an overall Cavedog unit-to-hover scheme. It cost more than the Luger and got less armor, but it is a lot faster and obviously compatible with both land and water.

My score: This is very rare... a unit that is more or less crap in both buildpic and model areas, but rule when it comes to balance. It use to be the opposite. Thus I admit that this unit got pretty much strategic use (once it is remodeled so people actually can look on it without constant need of vomit bags.