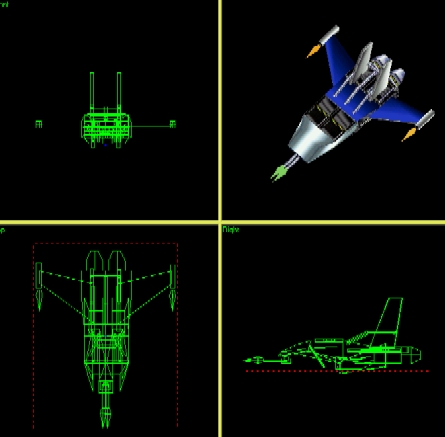 Buildpic: Nice angle and cool view of several ships... The only thing I miss is the jet engine dither effect and those flares everywhere are useless [3.5]. The background is in best SD-quality and is one of the best in the TA-community [3] and the merging is wonderful with reflexes in the water and everything.

Model: This one is slightly too big in-game, consider sizing down to 90% of current. The face count is huge, but it's mainly because of all the /transparent/ parts and holes through the unit and in the end, they don't even fit in-game. The tail should be slightly turned to get better look (from I I to " /) and those little extra wings that folds up are just useless. The main design is cool, but it is a bit too flat in the front and that tumbles around my aerodynamic way of life. The wings are also too small and the main body is just a box with too much faces and the rear part is squarish (except for the engines that actually look cool). I never noticed any sign of a barrel roll either, so all the faces on the underside are useless too (you don't see the bottom of the unit ever, unless in a roll). As on the Ninja, the cannons are too small to support such a heavy weapon. Anyway, the model got too many faces that are there for the design, but unfortunately obsolete, please remove them and retrn to basic design. Simple is beautiful, remember [0]. The texturing looks good in the 3DO Builder, especially on the underside... too bad that work is completely useless... : (. The rest of the model looks rather good and you seem to be able to handle many faces close to each other without problems (that use be one of my problems). But I'd rather seen that either the logo texxing on the wings or on the body itself got removed so you never notice the color textures in-game, but can clearly see that the unit is yours (like the Flash) [4]. The corpse is lacking, but that's not a problem...

Balance: As it seems to me, this unit is a waste of metal, since it costs ten times as much as the Brawler but only have twice the armor. The turning speed is low and the buildtime is huuge. The main improvement is the added heavy laser, but I don't feel that it is enough. Please read the balance count for the Magnum and you will understand that this unit is even worse since this unit does double damage than Magnum for more than seven times the costs and Magnum was considered underpowered. This is the first time I give a lower score than 6 for an underpowered unit. Still, better a unit that is obsolete than a one that makes.

My score: Why making units that cost huge amounts of metal and therefore guaranteed to not to be built even in a skirmish game? Why having such huge costs for unit when you gain much better gameplay variety with one that is smaller and cost less. One that it is fun to rush with, not to send out one or two. Please, unitmakers of every kind, lvl2 is relatively rare in multiplayer games, so by making overpowered units, you just annihilate the already next to non-existent chance to use the units online.