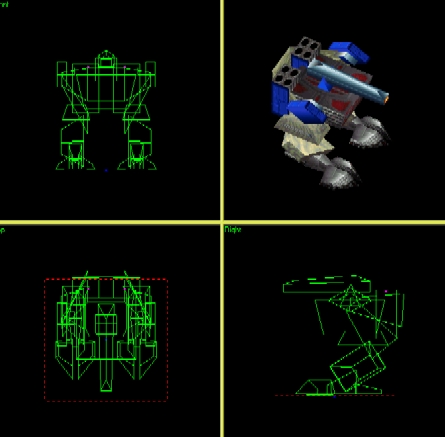 Buildpic: This version is actually worse than the previous  because of the very confusing background. I really don't like saying this, but it is too detailed for a TA unit and it looks very blasted in the game and with it, the previous 3D feeling is lost. Couldn't you place the new model on the old background? Unit 4, Background 0, merging 2.

Model: Um, first of all, a big fat apology to the creator for the flawed model score in the original version. As I use to, I copied a page from another unit and just edited the pictures and text, but I forgot to change the total score for the model and compiled the result together with the other scores into the final score. I just discovered it when I was about to write over the old model description with a new one. Only the texture score by itself did exceed the total score for the model. The final score for the original Ocelot unit was around 6.3 depending on what score the corpse got (I never wrote it down, one more mistake from my side). I am deeply sorry for the inconvenience, but also surprised that no one else detected the error and bothered to contact me about it.

Anyway, here comes the actual model part: The only difference with the last version is that some useless faces have been removed. The change I desired for: the rounding up of the torso did not take place and that's a pity. Just sharpen it up in the front and it will look much better at once. The cannon would still look better if it was changed to a three-face cube, both for the face reasons and because it's easier to shade. Something that I didn't mention before is that the flare doesn't fit the weapon the slightest. Either remove it or exchange into the LLT flare (that is a standard flare for all laser-like weapons). The cannon holder is still useless [3]. The texturing is just slightly better, but the red/black texture used on the larger part of the torso must go. Exchange it into one of those Arm camo textures that comes with a broad variation of details and shades [3]. The corpse looks very good [1].

Script: The walking seem to be fixed, but oh how ashamed I will be if it's not. Anyway, it doesn't seem to rock as much as before and the ground isn't as slippery (could be because of the speed increase), but the walking on the spot is still a valid hobby of the unit. The launchers - the biggest flaw of the script - are fixed. The laser is slowed down when losing health and/or walking (how he does it, I don't know, but it certainly works).

Balance: The changes in this version is that the energy costs have been bumped with approx 1000 units, the speed has been increased a bit and the laser slowdown when low on health or walking. The speed can be balanced out with the higher costs, but the laser slowdown is so little that it will not affect the balance especially much. The rockets are superior to any other weapons among level 2 OTA units since they not only can reach over Dragon Teeth, but over anything, thus they are seeking. Yes, some missiles will get lost since the V-launch principle, but the hurling long range is damaging. The best comparison is the long-range Core kbot Morty that fires artillery shots on longer range than this gun, yet have one third damage/second ratio, thus it's the only weapon it got and it can not shoot down aircrafts. I was told that these new missiles have longer flight time so more missiles are going to waste, but when I compared the new missile weapon with the old, I failed to detect any differences. I am sorry that I was drunk or damaged upon writing the last review, but my previous measuring are clearly wrong, this unit is so powerful that it in no way deserves a seven.

My score: It is clearly unbalanced, but I didn't dare put lower score since the violent riots of creators would strangle me to death otherwise. In any way, there was a slight score bump...