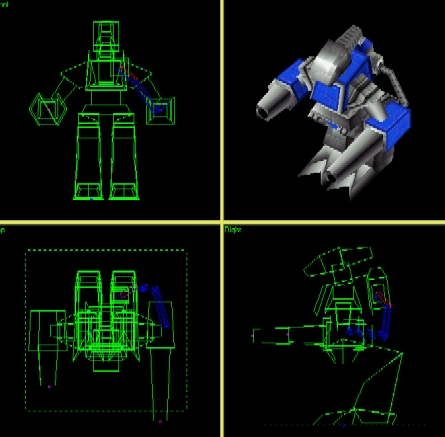 Buildpic: Very nice... great angle, shows off the predatory look of the model, shading is all in the right direction [4]. The Alien landscape a bit drab compared to the bright sky in the background, but it is otherwise very nice [2], apart from the shadow of the unit stretching off to the right too far, the merging is good [2]. This is one of the best old-school buildpics I've seen, the proof is in looking at the build pic next to the Cavedoggy ones ingame, the brightness and contrast matches well. Only other thing is it could be a little bit sharper.

Model: Yep this is the AK's big brother, and at that this kbot looks good. Perhaps the legs are a little too solid, and the shoulders could be wider, but that is personal opinion... The usual problem comes up in the form of excess faces, very few of the never-seen underside faces have been removed. I have gone through and coloured them all red so you can see (attached [ model ]). The cannons could be turned 45 degrees also so more faces could be removed. The /cable" going from the backpack to the laser is a nice touch, but why use a dozen faces when 8 will do the job. However, the model does fit the Core theme [2]. Texturing is good and the unit looks shiny, a bit like a terminator running around ingame, this is good though as usual the 3d shading is mostly absent. A few high-detail faces could be replaced with smaller ones with no visible difference ingame, to save the poor CPUs of the slower computers out there. I'd like to see the laser barrel a bit darker like the AK barrels, this would also help the laser beam stand out more when it fires, [3]. The corpse is well posed and thoughtfully textured, and the extra faces that could be deleted do not stop me giving it the full point [1].

Script: The walk script is similar to the AK because the leg structure is the same, but it is definitely an original walk script and not a straight copy of the AK's. The legs walk in place a couple of steps when it stops. This is due to the uneccessary motioncontol script used, unnecessary because this unit only has one walk mode, it does not swing its arms when it is not aiming. It doesn't need to though, it suits the model as it is. The stubby little plasma cannon has no recoil when it fires. Both weapons sometimes fire at odd angels from the barrels, but that is a result of two weapons sharing the same turret and is difficult to avoid without redesigning the unit. Apart from that, the script is funtional and works well. Effort has gone into the killed script too.

Balance: Now for the tough part. Yes, it's overpowered. It's a combination of little perks: Good speed, reasonable armour, a quick buildtime,  a pair of weapons that are always ready to fire instantly, a weapon with ok damage and good range PLUS a second weapon that can fire over wreckage. There's just no drawbacks to this unit, and the way they work on the battlefield is something to see. The unit needs 50% more buildtime and energy cost and ~75 more metal cost, or chop the range of the main weapon down to something shorter than the plasma and cut the speed to a bit slower than a maverick or pyro. At any rate, at least two of those nice stats needs to be tweaked down to give the unit some sort of drawback.

My score: Yep I like it... Like I said the unit looks a bit like a little terminator running around... It can give pleasure to Core fans frustrated with the weak AK or the slow Can. The laser needs to be a brighter colour, at present it looks like a dirty green-blue and disappears on many maps... The main thing I don't like is the weapon configuration. It's the same as the Warrior and Gimp, and that is a flawed concept - the only way two weapons can be on the same turret is if they are like a commander's weapons: when one is firing, the other cannot. Otherwise the two weapons fight for control over the turret, and weapons fire at funny angles... I would like this unit more if it were the laser from both barrels and the secondary weapon were something else, such as a very light v-launch missile, for example... Still, as I said I do like it, it looks as if it belongs in the Core family.