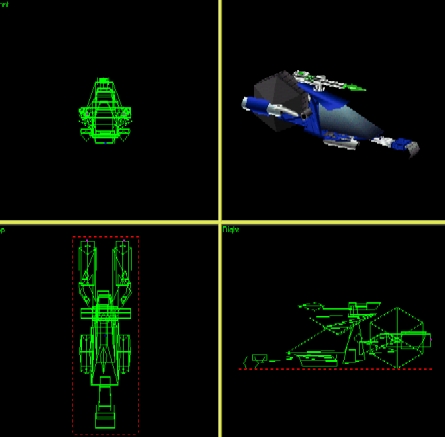 Buildpic: Ok, first of all, if your unit lacks faces, don't show the parts that lack faces, is that clear? This unit looks like something made of paper and not any kind of battle unit at all. There is a green flash in the middle of the picture and it kills most of the detail information close to it, like the cannon, for example. The two fireflares at the back are in best way confusing. The entire unit also seems to hover above the ground, since the back wheel is partly hidden in a strange way. And oh, the picture is very unsharp [0]. The background could be better than just something green and something blue or at least better shaded, so you could see the actual beach line that does exist there [1]. The combination is acceptable, but not the best. It seems completely normal otherwise, but the shadow points in the wrong direction and ruins pretty much [2].

Model: There are too many faces and just as I expected, not a single one have been removed on the underside, but instead on the front wheel and that looks really odd and unnatural in-game, since the wheel never animates and lacks certain important faces when viewed from other angle than straight forward. Even though the creators removed completely wrong faces, the basic design actually looks good and the only thing that screws it up is the front that definitely don't look to a part of the rest. The thing that holds the turret is useless because it's never seen and that black stick through the unit, just beneath the turret, seem to be there just to confuse unintelligent reviewers such as me. And oh, there is a small bug and it is that either the rear wheel is too fat or the things that holds it are too close, making the wheel partly go into the rest of the model and it looks like the wheel is actually placed above the rest of the unit and I got surprised when I discovered that it didn't [1]. The texturing is too dark, please variate the dark and light textures in a better way (light on the top, shaded on the sides and dark at the bottom). The Core logos on the sides don't fit there due to the deformation, but the exhaust pipes looks very great [3.5]. Some work have been made on the corpse, but unfortunately, the twisting was too much for my humble mind, so I don't recordnize any spot of the unit except the wheel that is now completely dark grey without any shading and the turret that rests next to the unit. Too little effort have been placed into good texturing [0.5].

Script: Standard aim animation and a spinning of a wheel. BTW, it stops spin in a very strange matter... o_O

Balance: Hmmm... while this weapon got a real power weapon, it have very little armor and that makes me wonder if it really is enough. The sentinel has six times the armor for the double costs, and since this unit is mobile, it should have a bit less armor. But I still think that it should be boosted by 50 armor units to be really efficient.

My score: Damn I hate the over-exploitation of HLT lasers. Why not give it the LLT weapon, drop the costs a bit and give it a armor boost instead of using that damn HLT over and over again?