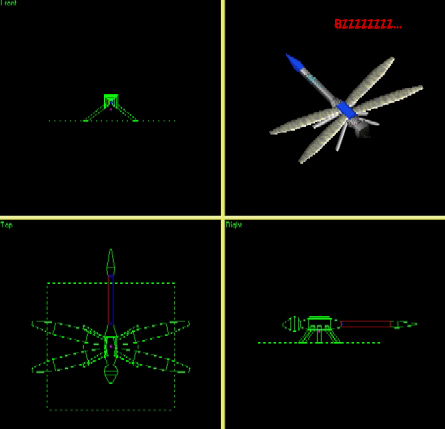 Buildpic: The picture is slightly too dark. I did actually prefer the highlighted version. The unit looks like one of those bluescreen works they have in movies where the object pasted in seem completely displaced. Someow, it also looks dead or at least heavily paralyzed by some highly addictive drug (or Viagra for that matter), because we are all used to the fact that no organic lifeforms use to have all their limbs and wings and stuff stretched out completely straight in all directions. [2]. The background is all fine [3]. But the merging stinks, no offense... It's one hell of an odd angle compared to the background and the lighs are all twisted. I can't really explain it this time, but I'm sure that most of you understand what I mean when I say that the model does not belong in this picture at all [0].

Model: One of the most fantastic aspects in this game is that if a model looks bad, it generally helps to size it down and this unit is no exception. It still has no resemblance to OTA what so ever, but it looks a lot better anyway. Small changes have been done on tha model and I loke most of them, yet there are some parts that I still would like to be improved. First of all, the six small legs are hardly seen at all... they're just in the way, so removing them completely would just serve the greater cause, trust me. Second, the tail still is't segmentated and looks very odd from time to time. Divide it up in two sections and let them swing back and forth pretty randomly. Third, the groundplate somehow still manages not to cover up the body [1.5]. The texturing is made as OTA as it is possible with such an unconventional model. There is a whisper (haha, now laugh) of CD:3D, although small (but I admit that there isn't more to do in this area, due to the look on the model). The logos are placed right and placed good. The texturing leaves very little else to wish for [5]. No corpse, no problem [1].

Script: Since the model has been sized down, the flip-flapping of the wings looks much better, but don't cheer quite yet. The wing movement still looks highly unnatural, the tail should still pendle back and forth and a new problem has arisen from nowhere. The wings flap when the unit takes off, but no more than so... This means that the Whisper can fly back and forth over Seven islands without moving a wing, which is kinda odd. What I would suggest in this case is to have two subscripts, one for flapping and one for random pauses, that constantly initiates each other. The unit flaps for a while and then glides, flaps and glides and so on. Thus when attacking (and the unit moving back and forth), you should hail the flapping subscript, because it looks instantly stupid otherwise. No score upgrade today, sorry.

Balance: After testing this unit in the game, I went and read the old review to see my previous opinions about this unit and was outright shocked by it. I had completely forgotten the speed of this unit when calculating the balance. In present state, you have a airborne Rocko with one fourth of the armor rating but that is far far faster and far more agile and completely immune to most ground forces like other Rockos and Stumpies/Raiders. They are very fast and insanely agile and due to their elevated position shoot over DTs and corpses and while an Avenger early in the game is sure to annoy the opponent for a while, this unit, due to it's direct way of fire, can completely eliminate him... and we don't want that kind of advantage, do we? Somehow, I missed all this in my previous review and I apologise for it. You have lowered the energy costs, just like I asked you to, but in fact you made it all worse due to my false predictions and the score will actually be lowered. The new balancing suggestion says to bump the costs with 20M and 1000E and cut the armor down with about 50 units (from 100 to 75, as it says in the .fbi). I'm once again, very sorry.

My score: It looks a lot cuter now than before and even though it doesn't fit into OTA at all, I actually like it. As a minor suggestion, since it's supposedly organic, maybe this unit should cost very little metal... maybe down to 20 or even less, but make it up with hideous energy costs? Anyway, I apologise again for the miscalcualtion in the balance and I promise, to override most of the cue to update this unit when the creator fixes the problems caused by me.