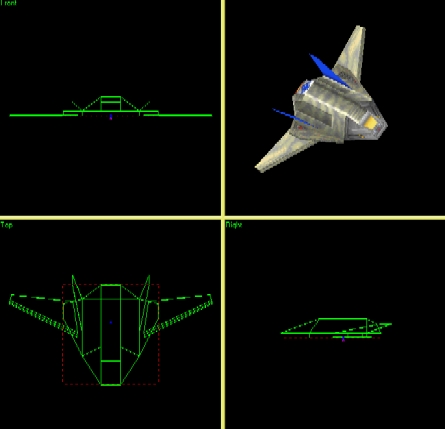 Buildpic: The unit could easily have a much better angle, as for example the one I have in my .3DO shot above. The version on the picture look like an ill-colored extraordinary odd blob hanging in the air without any intention of coming down [2]. The background is absolutely über with units firing back and forth and those small puffs of smoke from anti-air artillery. Nice mountains, and extraordinary light that reflexts perfectly in the water [3]. Sadly the merging isn't even half as good. The unit seem to be more like an alien from a completely different dimension trapped in an uncomfortable position. It is colored completely wrong compared to the background and there is no trace of shading. To better understand what I mean, you should find any picture of the surface on Mars with the rust-red terrain and orange sky and then copy-paste a blue clipart baloon. Of course, the baloon will be completely unaffected by the color settings and have no reasonable shade similarities. To make it all short: Work on the merging a bit more [0].

Model: The unit conscists of a very big body that just groans for another hamburger and small wings that are ejected under flight to make it look like this fat unit actually can gain any up-driving force from it. My suggestion is to slim the body a bit and to broaden the wings so they start higher up. Bah, can't explain anything... No really useless faces, btw [3]. The texturing is very nice and though-trough with the axact ammount of logos needed [5]. There is no corpse. Who cares [1].

Script: I like the fact that the wings are ejected , because it make it smell Arm (Core fold the wings and that smells different)

Balance:  Compared to the Arm Phoenix, you know the big fat adv. bomber, this unit cost 50% more metal (almost the same amount of energy, though), got double armor (well, technically they have just as much, but then all OTA AA units do double damage to OTA aircraft, so the result is that this unit got double armor in practic) and a comparatively weak missile. You see, the big fat Phoenix in all it's glory makes 975 damage every run while the lesser equipped, more expensive Ganymede only manages to push a stinking 650 and Ganymede makes even longer runs than the Phoe and it moves a bit slower too. It is true that if you micromanage the Ganymedes or simply set him on patrol, hold ground over some place he will push the 90 damage/second I stated in the stats far above. But then again, with that turnrate it will be ripped in pieces before you even notice...

My score: The Ganymedes is a cross-bred fighter-bomber that acts like a fighter, but have the stats of a bomber (i.e. slow, well armored, powerful weapon - long reload). I can't really tell if the result is positive or negative, but I can tell that this is a nice strategic diversity that sadly don't hold the marks to be real good. Keep it I will, however, waiting for the next series.