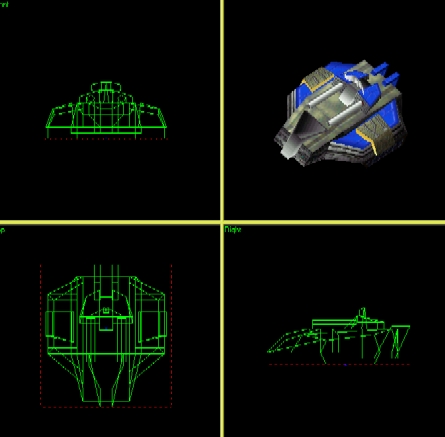 Re-revision: Read the complete review of the old version here.

Buildpic: Overall perfection... Btw, am I the only one to see the Swedish theme on the color settings of that pic? I'm sure Hamb0 did it on purpose ^_^

Model: The body should be a bit thinner, not so fat as it is right now. The face count is acceptable and there are no really unseen faces left excepth the ones on the underside slopes of the tracks (they have still not been changed), but the very rear lower part of the body has been remodeled completely (to the better, fortunately). Not so OTA, but it ain't too alien either and I feel that the mixing is going along pretty well. The barrels could still be a bit larger (fatter) to support the power that they actually emit, but it's not that important [4]. The Cavedog 3D is still lacking and the only texture change made was on the turret, where the barrels grow out from it. And since the tank still got rather heavy logo-tex abuse, I can no bump this score [4]. Corpse is same as before (good, that is) [1].

Script: Brilliant… I’d feel bad if I didn’t give away a full 10 here. The shield activation/deactivation is magnificent (ass all other shield animation too). I did never notice that there were an extra weapon in the game, just the main started firing faster. In every single way, this script is perfect.

My score: Well, since I liked the unit before and it has been (mostly) improved now. Can it be better? Just so you know, the Rebel is a VIP resident in my /totala folder and I admit that Mayhem occupies most apartements there.