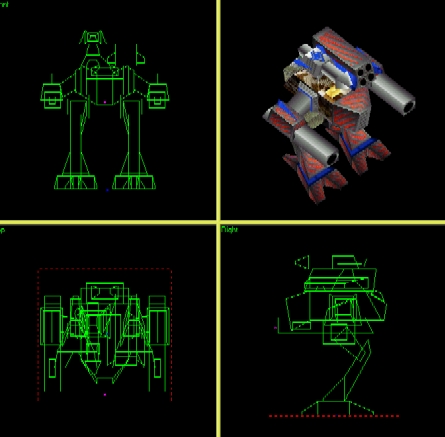 Buildpic: This is actually the only render of the Raptor that looks good (in my taste, that is). The angle is nice and so is the texxing. I'd preferred to stare at rounded barrels, but it's not a big problem. The missile (the tesla-gun) is hard to see [3.5]. The background is fine, but why does that heaven get lighter to the left and not to the right as it seems naturally? The terrain shows some kind of cloud effect that looks good [2.5]. The merging however is painless... shadows and lightsources match everywhere (except the heaven) [3].

Model: The model, for once is very cleaned up and I see only four (that's right - 4) faces that are completely useless (unlike a bit more on the Razorback). Apart from that I dislike the Raptor-style, this model looks good [4]. The texturing, however, is worse... Too much of that black-red texture (as you see on the pic above), especially on the legs. It looks good in 3DO, because there is a comfortable mix of other textures, but when you see him from above in-game, you see only the red stuff. Other texture mixis don't even look good in 3DO... like the Core Camo texxing just beneath the tesla-gun or the very non-fitting light-green back. Very strange way of shading on several places, such as the /head" [1]. The corpse is easily described with the phrase /Something boring/ because it simply have almost the same concept as the Razorback but with fewer faces and more interesting way of lying on the ground. There is more effort in this corpse, but I'd say it looks just as junky [0].

Script: Although the walkscript is complete and debugged long ago, it feels unnaturally slow (at least the part when the legs move forward). It could be compared with walking... when you walk and one of the legs is so far back it gets, the other one have still not touched the ground. This would seem perfectly sane if you or the unit were running and the legs touch the ground a relatively short amount of time, but when walking one leg always touches the ground. That is the ultimate way to save energy and that is why no human make a jump between every step when walking normally. If this script had been speeded about five times and the speed just as much, it would look great, but it is /slow running" right now. Enough of that, there are more twisted bugs in the flour. A good example is the aim script for the barrels... aim just next to the unit (or place an enemy unit there, whatever is easiest) and the body will aim on target, but the barrels will still point straight forward, but very unsurprisingly (I was prepared for this) shot on target like it was normal for barrels to shoot at 45 degree angle. You should either order the arms to aim individually on the target or have the PeeWee effect where one arm at the time (preferably the one that is about to fire) aims on target. While the torso spins, the guns on the shoulders does not and it look very umm... naturally : P.

Balance: This unit is in Krog-class. For about 5000 less metal you get about 5000 less armor and 25% lower buildtime. The question is: Is this enough to have such weapons? Let us see: Krog-Annihilator... range 700, d/s 625 - Raptor-tesla... range 400, d/s 510; Krog-missile... range 900, d/s 94 - Raptor-rocket... range 700, d/s 70; So far so good, eh? Now comes the big exclamation mark: Krog-cannons... range 300, d/s 300 - Raptor-cannon... range 450, d/s 400... This cannontype /rolls" on the ground just like the Comm D-gun and can inflict up to 2500 damage to a horde of incoming units and even if the other weapons are weaker and shorter range, they can not make this weapon balanced. I mean the annihilatior does just as much damage and at longer range too, but most of the damage it inflicts is lost because it mostly kills relatively low-armor units that do not have even close to 2500 armor. For this cannon, it can inflict much more actual damage. The weapon power should be lowed from 400/touchdown to at least 300 to be sufficient. Otherwise, it actually gives some kind of strategy to the unit.

My score: Krog-class costs, weapons, armor, stats... oh common... I dislike the Raptor-mech style and I dislike high-cost units, but with retexxing and a slight rebalance, this unit could actually survive longer in my totala directory before forever disappearing in the backup folder. I actually expected the worst in this unit and was prepared to give away a very long mark after being annoyed with the blatant pimping from Gamefreak, but I was positively surprised... Anyway, I'd like to end this review with one of the most known quotes in the TA community: