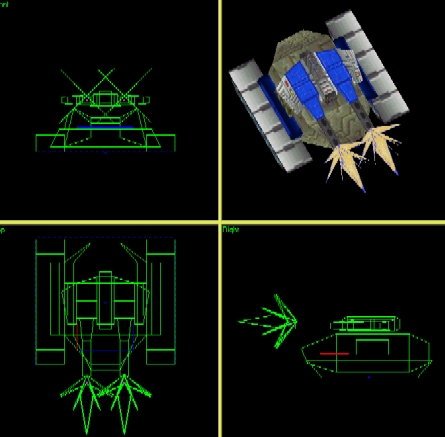 Buildpic: Nice angle and coloring scheme, but the border looks a bit dull. The right barrel is hard to distinguish [3.5]. The background is good in front, but could be much better in the far back view. The sky is slightly weird too [2]. The mix is good... even the different parts of the unit shade other parts (I rarely see that) [3].

Model: The model is not the best. First of all, the tracks are turned wrong, because at least my instincts says to me that tracks use to be rounded up somehow and not so squarish as they are now. Also, in the current settings they look insufficient to support such a big vehicle. The face count is pretty low for such a large unit (that I think should be resized to about 90 % of current size), except for the turret that got really many, but it could still be much smaller though, since only six of about twenty downward facing faces have been removed. Also a minor boo to the turret design that is too flat, too wide and very strange built and also because it is placed too far in front. The body is divided in three sections with different modelling style as if three people gathered and made a part each. The tracks do not seem to belong the body and the turret doesen't fit neither [2]. The texxing is in best case boring... the tracks got a very strange textire that only pushes them away from the rest of the tank, the body is all in same texture with no kind of shading effect and the turret is abusing the logo texture. Not the best settings with other words [2]. You get a full score on the corpse, but to next version, I still suggest to twist the turret a bit, texture the tracks in wreckage color and removing that annoying bright flash on the barrel.

Script: Standard aiming script. Not even a sign of a Recoil, despite of such a powerful weapon.

Balance: Once built, this unit becomes a moving annihilator. Sligtly shorter range, double costs and same damage. That should be enough to sound balanced and it actually is. A Bertha actually cost 2000 metal less than this guy and I think that if you let your opponent build him, you have to blame yourself. There are three flaws through and it is the amphibious ability, the huge damage area of the shots and the enormous pantzer ammount of the tank. Size down the armor to around 3500 and you should be fine.

My score: Uhu... one more of those massive-cost-massive-damage units.