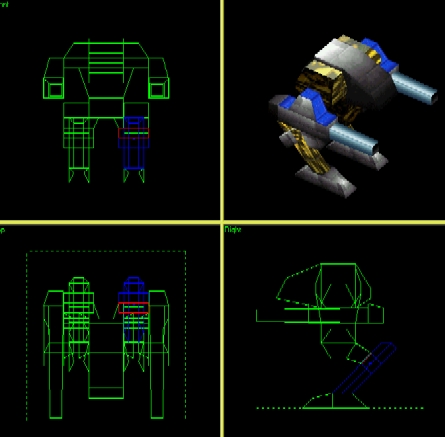 Buildpic: The picture don't fit among the OTA BPs mainly because of it's jpg look-alike compression with shades instead of the corny Cavedog style. The unit looks a bit odd since the torso seems to be at least two times larger than it should, but looks rather realistic except for the shading conflict between the feet and the /cabin" [2]. The background is brutally boring... there are no objects in screen nor interesting shading but it is still better than a one-color-only backgrounds that I've seen [1]. The two merge together rather good but it feels like the unit is a bit misplaced. I personally don't like the contrast between the unit and what it stands on. There are a shadow beneath that looks more of a reflecting actually. The lightsource seem to come from the left back side somewhere and in that case, the unit is misshaded, but it still looks somewhat descent so you get a [2].

Model: To sum up the look of this unit, it can be compared with an AK on steroids. The torso is too large, as the head and it feels like it will dimp over any second. The facecount is quite a bit above the borders that I've set, but I can only notice a handful faces that are editable (the one on the underside of the torso, facing down and lower legs containning too many faces, among others), so the score will not suffer that much. All faces are cut in a good way, as if the creator espected me to inspect this one, but there are some minor faults such as the /knee" joints being a bit too square and... (prepared to write another model flaw, but did not detect one, is it a sign?) [2.5]. Now, to the texxing skills... The lower parts of the legs have the same texture all over and thus merging with the other alike texxing close to it (as the top legs or the torso) when in the game. The shading is also a bit odd, since all the faces on the back are lighter than in front like the other OTA units (the cabin shading should in worst case be reversed). As the great whole, however, this unit shares many similaties with Morty [3.5]. The corpse look good, is well-textured and with many faces removed so you get your [1] point. It does, however straighten my suspicions about the size of the torso, alternatively the lenght of the legs.

Script: This unit have a bit clumzy walking, mainly due to it's large feet and the bad texturing of the legs (especially from behind). The unit seem to have a half-walk walkstyle where it exercises the walking part of taking the legs from zero position and then behind without being in front of the zero point as much as it should. Also whn compared to the Morty from behind, the Hunchback doesen't even seem to move the legs, since the texxing there is awful and lack of front movement. The rest works as it should, though.

Balance: This unit is a bit too powerful... For the costs of 35 extra metal units, you get a bot that is slightly faster, 30% more armor and that got much powerful shots that have shorter range. If the damage of the single shot was lowered from 128 to about 95, this unit would get the full score here and would then be a good addition to the Morty.

My score: It's not that I dislike the unit's balance or buildpic, but somehow, I'm pushed away by it's appearance. The torso is in my opinion extremely gross and together with the odd walkscript and oversized feet, this score gets busted.