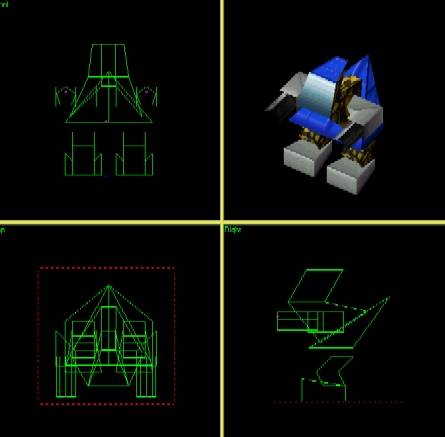 Buildpic: There is a slight problem with the model here, since it looks bended all over and over and since they are never seen in the game, it wakes confusion. The unit should also be a bit more zoomed in and if possible being more high-poly at the head [2.5]. The background is nice and although it got very un-taish color sheme, I happened not to see it this time [3]. The merging is as far as I can see flawless, besides the odd light that only falls on the unit. The mountains should be that light all over... [2.5].

Model: Whoopie, this one looks much better than the last one I saw. This unit got very few faces, but many useless too. The legs, as I said should have been straightened out, but they were instead heavily face-reduced. There are two undereneath each barrel and there are three to gain by remodelling the inner /arms" to one cube to go through the body instead of two as it is. The base plate should be smaller too... There are by the way two hidden (but fortunately not textured) faces in the main body [2]. The texturing this time is close to perfection except for the arms [4.5]. The corpse is well done [1].

Script: The legs still move back and forth, but unlike it's predecessor, this unit don't care about turning the arms. Instead, it turns the torso to the left and right  and surprizingly, it look rather good. One problem is that the unit don't wait to aim before opening fire and sometimes shoots straight through itself.

Balance: First of all, please remove the Warrior weapons (along with all .h files, by the way) from the .ufo, they just take up space.

Now, to the current balance: this unit still does less damage damage/second than three AKs (that together cost 17 more metal) but this time, it got a bit more armor.

My score: The other disgrunted model left the building in favor of another, more TA-like one, except for the brick feet. I still don't like the idea of letting the Core to have an EMG weapon, but I'm awaiting a change of tide... Down into the evil backup folder, willya?