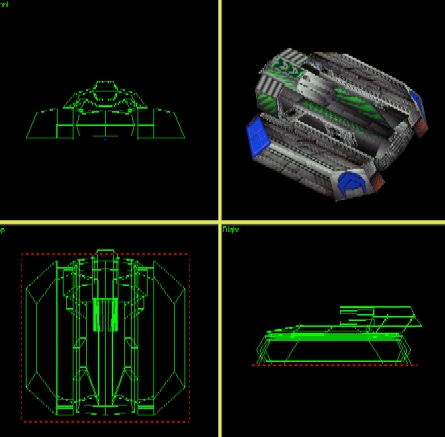 Buildpic: The buildpic is overall very nice. Good angle, background and shading leaves not much else for me to set than full point

Model: First of all, this model is too large, resize down to bulldog size. There is also too many excess faces and many downward facing too. The cannon itself should be slightly redesigned with only two faces for each of those ehm... blades. I'm sure you would get a better effect with just a big fat cannon (that round things that point out in front of most tanks). Anyway, the model is designed with insufficient or next to none low-face strategy that could be much more improved [1]. The texturing is dark and very very messy in-game wher I could not really distinguish the cannon from the rest of the unit dues to very similar textures all over the place. The texturing is variated, you get a plus for that, but you got to understand that only corpses use to have this kind of brightness. The logos are fine, two minor logos on the turret wouldn't hurt either [1]. Fantastic work on the wreckage itself, but the texturing kilols most of it, I'm afraid [0.5].

Script: Standard aiming. You should edit a bit so the flares are seen a bit longer. The eye don't have time to see them flash by at all. The weapon velocity should also be lowered, since it's color make itself hard to see.

Balance: It cost 50% more than a Goliath and have a proportionally correct ammount of armor. The weapon does only half as much damage/second but got twice the range. It would look rather fine here, but unfortunately, the Jupiter got three times as high energy costs as the Goliath and that makes it being really underpowered. To get this back on tracks, lower the metal costs with about 200 and the proportional amount of energy.

My score: I'm not so quite fond of tanks with high ranges, even if they are balanced. This got a good pic to look on, but is only some kind of rolling shadow in-game.