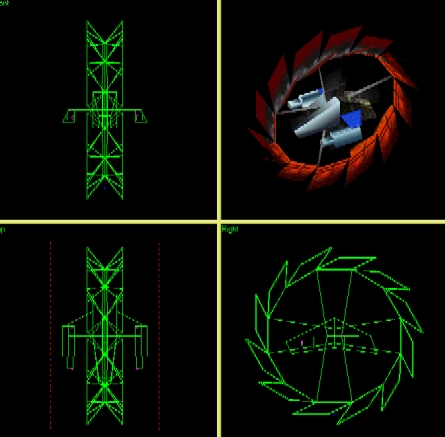 Buildpic: The buildpic looks nice, the angle is good. The laser isn’t completely unfitting here, but it gives the unit a cartoonish look (in the better meaning of this word). The dust is nicely made, and the merging is acceptable, together with the shading.  Although the dust is somehow red... It doesn’t really fit with other OTA buildpics, because of the model and the nature of the unit. Unit 3, Background 3, Merging 3.

Model: The base hull is quite acceptable. No useless faces as far as I can see, and design as a whole is quite efficient. Nothing near any other TA unit design so far... But it isn’t really a flaw [4]. Custom textures have been used for this unit, and their placement is acceptable. The red blades make for a really aggressive look. CD:3D is present, although some areas of the hull lack it. Again, no trace of OTA-ish look [4.5]. The corpse is nicely done, although some faces on the underside were not removed [1].

Script: The giant sawblade spins as the unit moves, and the entire unit banks when turning. It looks nice overall, but I would suggest to lower the banking speed, together with the turnrate. This giant wheel will never keep balance at such slow speed when banking like that. The two guns held by the two arms aim and fire, depending on the direction from the unit. Well scripted, overall.

Balance: Hmm...  I don’t know what to compare it with, due to the weapon this unit uses. Let’s compare it to the Can. The Wheeler’s weapon packs out 450 damage per second, while eating 175 energy. Compared to the Can’s 231.6 and 75 at twice shorter range. It costs about 1.8 times more metal and energy, not enough to compensate for the advantages so far. It has 4 times less armor than the Can, while moving 6 times faster. My verdict: overpowerful. Maybe cut down the weapon power to 350, and raise energy costs by two or three thousands.

My score: I like this unit, despite the fact that it isn’t really fast, and cannot climb high slopes, which is supposed by the ‘hookblades’ on the wheel. It’s an all-round good unit, just a bit overpowerful. If it wasn’t for my Drones, I would keep it, but for now, move to backup until I decide to play OTA. Btw, change the in-game name to something like ‘Wheeler’, COREWHEELER written in all caps doesn’t look right.