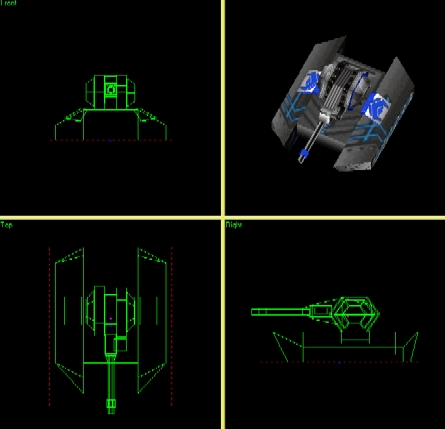 Buildpic: The unit looks nicely shaded in the buildpic. The angle is pretty good. I can see shadows, although I think you should lighten them a bit. The Core logo is a bit hard to see though [3]. The backround seems well, boring. Try to add in some objects or some hills or something like that [2]. In my opinion I think the unit should bee a little further out and centered more. I won't deduct or add points for this though, just an opinion [2].

Model: The facecount is ok. I was a bit surprised when I saw the flare was 95 faces though :p. You can rotate the barrel 90 degrees to cut off an extra face. I noticed that the shape of the body of this unit is different from the others, you'll hopefully see what I mean in the small drawing above [3]. There is no CD:3D on the model. The logo textures and team color textures are placed well. I like the textures, but it doesn't really fit in with other lvl2 Core units. All the textures on the body are too dark, please lighten them [3.5]. The corpse has CD:3D, so it's acceptable. [1].

Balance: I'm going to compare this to the Core Crock. The Crocks' costs are about half those of the Waves'. The Wave though has slightly more armor. The buildtime of the Wave is around half of the Crock's as well, so you could pump out 2 by the time someone else has one and basically match their one. The Wave does 98 damage a sec with a range of 260 while the Crock only does 67 damage a sec but on a 320 range. The turnrate of the Crock is about 1/3 less than the Wave while the Wave's MaxVelocity is much higher. I'd say this thing is a little overpowered. I think you should reduce it's Maxvelocity by a bit, and maybe raise the buildtime slightly.

My score: When I first saw this unit, I thought it was going to be an insanely overpowered unit. It turns out this unit is just a bit overpowered, lighten the textures a bit and fix the tracks and I think we'll have found a winner in this one. I like the fact that this unit has a short range but fairly powerful weapon though, the first time I used it I assumed the range was longer and was up against about 30 arm lvl 1 units. I got worried when it didn't fire but when they got too close BOOM! ^_^