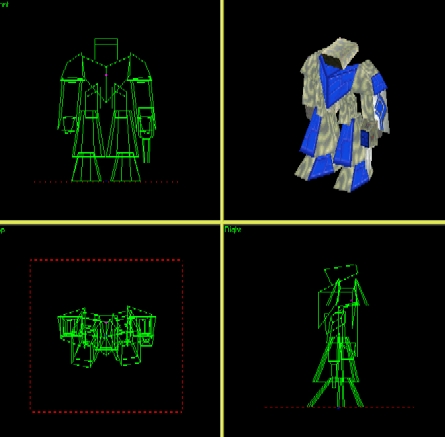 Buildpic: Fantastic. Should maybe be sharpen a bit to get the OTA more corny bp...

Model: Naw... The groundplate needs to be smaller. If fact the entire unit need to be smaller in-game because a guy that costs 60 metal should not be of Maverick size. The gun or at least it's barrel should be larger, thou because it's hard to see it. I suggest that you scrap the pistol look completely and exchanges it with a fat barrel of the same dimentions. There pelvis is completely useless, as is the /face" face. The flare should be moved a bit from the gun, since it currently looks like it materializes itself inside of it [2]. The texturing sucks... the logo is critically overused and the arm camouflage is neither variated in shades nor variants the Arm logos on the arms looks demented [1]. Just like the othe units from the Dojo I've seen this far, this unit got odd corpses with lots and lots of faces, many of which can be excluded without anyone noticing. This example in particular have 107 faces just for the debris (instead of the more appropriate 20 or even 10 would have done it), but that's not all. You see this time, the creator was tired of the slow process and decided to color the entire 200-face object in one same texture. He did save time, but that costs him one point [0].

Script: The unit is too jumpy. I like the body turning forward when he takes a step, but it's a bit too much. He does also often takes one or up to one and a half step after being stopped and I'd like to see an interesting recoil sequence.

Balance: Wa... yeh... This unit costs 4 metal and 300 energy more than the AK. And while using the same weapon, the Slick got a tiny armor boost and much more speed. I can tlerate the armor, but the extra energy does not compensate for the 50% speed increase. If looking through a metal maker, the extra energy is in fact worth pityful 5 metal units. My suggestion is either dropping the armor with 50 units or increasing the metal costs with 15-20 units. The Jeffy cost less and is faster, but wth, it's maneuverability is a joke!