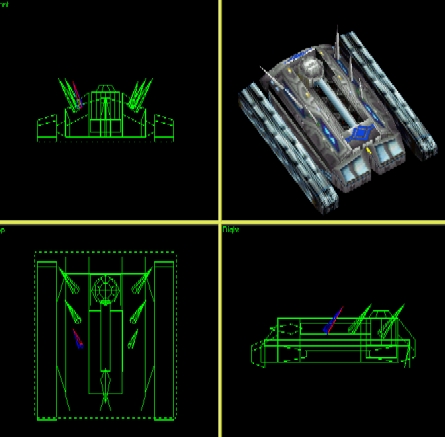 Buildpic: Nice angle of the unit but I'd prefer seeing it aim something than having the barrel in the offline-state [3.5]. The background is sharp and detailed, but too bright. It hurts the eye (at least mine) [2.5]. The Merging is rather flawless with no indirect light sources, but maybe another angle of the sun would look better? [3]

Model: This one got very many faces due to defective way of designing. Just a sign that this unit was one of the first the creator did (beleive me, I had this stage too when I made small model with huuuge excess of faces). The tracks should be moved closer to the hardcore body itself to save faces and make it look more naturally. The cannon should be decreased from eight angles to six and the storage chamber for the barrel could be redesigned a bit. The spikes should be removed completely, since you only see them briefly in 640x480 resolution [2.5]. The texturing is odd andd don't fit TA style at all (use the Arm cammo texxes next time) but the colors are chosen wisely since they look good together. The spikes and the body beneath just floats together into a grey-blue blob in the game and sometimes, you can't even distinguish the barrel. All the effor that have been placed into the unit in the 3DO Builder is unfortunately lost, such as the small logo textures or those windows in front. There are btw a bit too few logos on the unit so I suggest that you add some on the top of the turret too [2]. The corpse is ok, there is some physic deformation and different textures all over the place. But if you decide to update the model, please turn some of the texxes so they don't look so stretched [1].

Balance: The creator made a tank that costs about 50 % more than a Stumpy, but actually got a bit less armor to compensate for the improved weapon type. Unfortunately, I don't think that he did compensate enough. I might be able to withstand the increased damage/second value, but this gun fires much longer. Too long for its costs. I suggest lowering the damage/shot from 55 to 45 or perhaps even 40.

My score: I'm always happy to see lvl1 units, but I don't know... this one lacked that something special, so unfortunately it's gonna be a low score. And oh, perhaps it's just me but I don't like the sound of it firing...