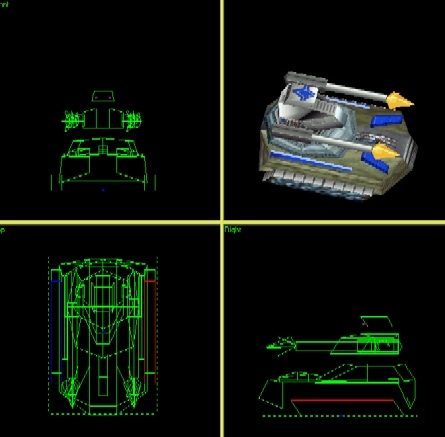 Buildpic: The obstacles in the background needs to come a bit closer and the terrain needs to be darkened and with better pattern on the ground. The light background makes the unit look too sharp and too dark in comparison, damaging the merging effect. Unit 4, Background 1, merging 2.

Model: There are many many useless faces around, it is clear that we are facing one of MAD TA's pre-URC units where the face count was irrelevant and people tried new, original ways of designing. What we see here is a clearly wrong way of barrel suspending /o-(><)-o/, only planes with jets instead of wings look like this and there is a reason behind it. Having the barrels integrated with the turret directly like /(oo)" or skipping the suspending part /c(><)o" (where the o is a c facing the other side) is equal to improving the overall quality of the unit. The underage tracks are too small in most of the four dimensions (where the fourth is time) and can be best compared as pulling off the wheels of those small tri-wheeled bicycles and putting them on your car. The missile launcher should be remodeled as it doesn't really look like what it should. It's size should be increased as well. The big pre-turret part of the hull should be eliminated altogether and both the turret and the launcher should be lowered significantly [1]. The texturing is pretty much okay, except for the launcher that is hard to distinguish and the part under the cannon that is plain ugly. Surprise, surprise - there is CD 3D [4]. The corpse body looks good, but the remnants of the turret have been textured awfully [1].

Balance: This units costs about 120M and 240E less than the Bulldog. For these costs, it got 700 less armor units, which is a 30% disadvantage counted from Bulldog's side. The combined strength of the weapons is pretty much lower than the powerful Bull cannon, even trough the increased average range contributes a bit. It is also both slower in speed and turnrate. This unit is pretty much underpowered, so to solve this matter, you might bump the armor with about 402 units and everything would be fine.

My score: Hummjah... even though there is a stratec value of this unit, its cannon is plain ugly and a pain to look upon. Same thing with the launcher. The unit zip file is misspelled.