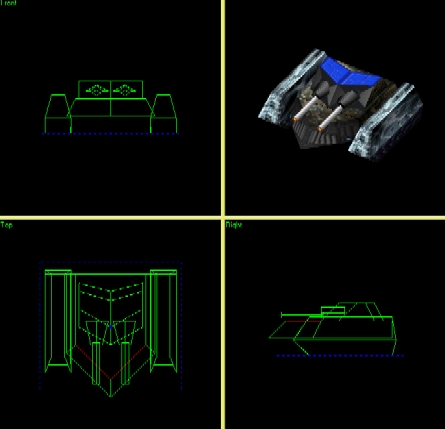 Buildpic: The unit is in a semi-nice angle. Something is wrong with it, but I can't really tell which direction it should be turned. However, it could be moved higher up, closer to the middle of the pic and generally more zoomed in [2.5]. The background has some of the most distorted color settings I've spotted. Well, if you feel bad and throw up, you don't put a tank in the goo and take a picture, right? [1.5] The merging is acceptable, besides the extra strong light over the unit alone [2.5].

Model: First of all, in my personal opinion, this unit is a snap too large ingame, size down with 10-20% and you'll be fine. Something does also disturb me in the very wide and short model, but then both the amphibious tanks (Crock and Triton) look like that. The turret is a bit too sharp, so a rounding up wouldn't hurt. Four useless faces on the underside of tracks... [3] The texturing is full OTA with no real flaws besides the extra logo textures on the rear parts of the turret. However, while the weapon color is red, why the heck are the flares white for? [4.5] The corpse is present, wrecked and textured as it should be [1].

Balance: Compared to the Core Instigator, this unit costs 53% more metal, navigates a bit faster and have 33% less armor while the speed is basically the same (5% lower), but what really differs the units is the weapon. The Gator got a range of 180, 3.5 times shorter than the blade but then, the Blade does one third damage/second as well, so technically, the weapons are equal in strenght. Comparing to the Core Slasher missile, Blade's laser is tucked in quite nicely, seing as the missile does a bit more damage on a snap shorter range and the Slasher's missiles are seeking. Thus, taking into consideration that this unit fire a bit slower when moving, the costs are clearly too high. My suggestion is to chop off 40 armor points and cut the costs to just below 100 metal. Or you could keep the costs as they are, size down the model even more (30-40%) and double the speed to create a guerilla unit.

My score: You will like this unit, more or less because it will give your enemy the creeps if you mix in a few of these into your invading horde. The battlefield will light up with laser beams as never before as the blade let it's weapon dance back and forth. A nice addition to the TA weapon diversity...