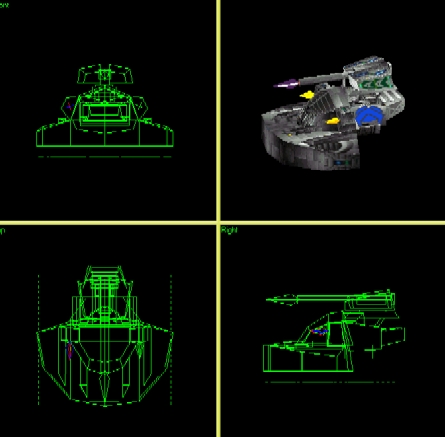 Buildpic: The model is like a black hole on the pic, sucking all attention to it. The angle is nice (as always on buildpics) but the shading and the color scheme are not the best [2]. The background is very nice with some kind of lake to the left. I love it [3]. The mixing could be better, however because the dark model don't fit in the otherwise so bright background. The shadows are fine but the way this guy hangs in the air is very unrealistic [1.5].

Model: I suppose you got the idea for this model just after watching Episode I, eh? : P Anyway this model is way too large and feels kinda squarish without any kind of rounding up on the main /base" and I think the angles on the sides of the body would look better if they were bend backward instead of forward. Nice design on the main cannon, but the missile launchers are just too small (compare to the size of the missiles and you will understand that only one of them can fit in that launcher and that is only when cut in three pieces and stuffed in without care about space. Three of them can defenitly not be fit inside. And finally one.. more.. thing.. Yep, you got the right guess... it's the faces. Does this hovercraft make barrel rolls? If not, please remove all 20 thungs underneath, would you? [1]. The texxing could be much better... too dark and a complete mess under the cannon. The cannon turret itself is far from perfect... yuck. There is no CD-3D at all, many textures are set on random [1]. Corpse looks good and have been face-cut... full point.

Balance: Costs more than the Tempest and deals more damage, too but the big question is if it deals too much. Answer: Depends... Actually, this unit is highly strategical and I would actually consider it *gasp* balanced. Although I can unfortunately not give you a ten because I am highly unsure and have nothing clear to compare with... You get a nine for now, but I might change my mind later (got to think about it a little). I hope this is the right choice...

My score: Nah, I didn't like the texxing... too dark and squarish. I like the new kind of weapon, but I think that It would be more proper with a short beam and another hitting sound. The current is ... uhm... lame. Position secured in the backup folder.