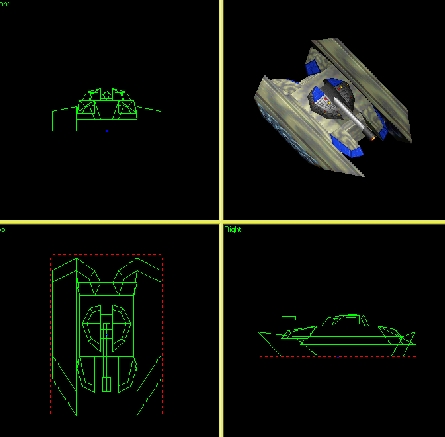 Model: I don't really like the basic concept of OTA pointy tracks - I don't know why they are there, but they are for sure. However, I can not, as I previously did drop points for following OTA theme. Then either the turret (+ barrel) are too small for the body or the body is too large compared to the turret. My guess fall on the latter.[3]. The texturing is allright, although slightly too repetitive. additions on the top of the tracks with different textures would probably do the trick. The CD:3D is in shape, lacking only the seen inside of the track being lighter (as light falls from that direction [4.5]. The corpse is fine [1].

Balance: The unit has lost much of what armor it once had (now having a snap less than Triton), but gained a lot of speed and agility while placed in the level 2 plant. As a total, I must say that the Covert is overpowerful at the moment since it is beaten by the Triton only in armor while sharing the same weapon and the Stealth abilities are far superior to the amphibious ones. Just compare: To need a amphib unit you have to use a map with deep water and with relatively tight packed islands and how many maps provide that? To use a stealth tank, you only need land connection to your enemy and there are countless maps without water. If an amphibious unit is potted underwater, it is screwed because it's defenseless. If a peewee discover your stealth tank, the peewee is no more.

My score: Better yet, since the obvious failure with the previous version, but not too good for me.