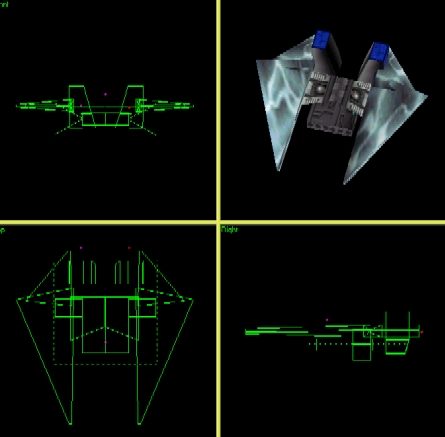 Buildpic: Impressively cool angle of the unit and very nice wake effect. Any attempts to not to give full points here would be just cruel [4]. The background is just like very transparent seas use to be and everything underwater tend to be flat, not sharp, so I can't blame you for having the terrain flat. But the shading of the water masses is a bit odd, since the light should come from above, not from beneath [3]. The mix is acceptable... I see no shadow of the unit, but the camera wiew could be very different [2.5].

Model: Very nice concept of the model, but a bit too fat in my taste and way too large in-game. I mean, since the unit is less powerful than a Snake/Lurker, it should be smaller, but it is in fact bigger... Wonder why. Also, the /wings/ should overlap the torpedo chamber a bit, because it would make it look cooler. The front and rear wing parts are also forced into each other, as seen on the pic above and it don't look so beautiful. Also, not a single bloody face on the underside has been removed... baaad. The final score is still 2.5 because even through you screw up a couple of things, the concept looks refreshingly new and the face count is very low (it could be lower, though). The texxing is a bit weird, especially on the underside (lucky no one will see it). The shading is strange for example and the wings just above the launcher are too dark. Also, the logo texxing on the jet engines should be inverted (i.e. the dark logo spots should be light and the light should be dark). Anyway, an overall good job gives you 4 points here. The corpse don't deserve anything...

Script: This script will not be counted, since it is too little to get a score for. The jet engine folding looks nice, but the extra wings that pops out just look painful, remove them, please. Also, the weapon got a small bug and it is that the unit can not shoot longer than about half the range that it should be able to shoot due to too low weapon velocity. Delete the startvelocity tag in the weapon script and you should be fine.

Balance: This units cost double as much metal as the Snake while having much lower armor and deal less damage. This unit is superior in one way only and that is speed. It is able to move more than three times as fast as a Snake, but unfortunately the acceleration is so low that it will get that speed in the last screen lenght when travelling shore to shore. It also got 50 % longer sonar range but that is insufficient to compensate for the high metal costs. Umbalanced, but not overpowerful.

My score: With some minor altering of the model and the balance, I would like this unit. Until then...