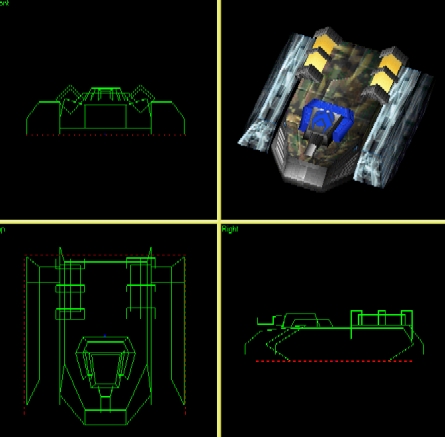 Buildpic: The only thing I can comment on is the background that in my opinions looks quite unrealistic somehow. It seems to be a part of clean, polished and waxed hotel interior floor, which doesn't make the slightest sense when you think about it. Please... just change the background. Unit 4, Background 1, Merging 3.

Model: The unit follows the standard Cavedog tank model schematics with relatively efficient face count and a model that merges quite well with the rest of the game. However, I find the turret being far too small and placed too far in front. If the blinking storage-looking containers were in fact mounted on the turret and the turret would be placed in the standard place (a bit back, not too far), it would be completely perfect. Until that, it looks really odd in-game to me [3]. The texturing is pure Cavedog-style as well with well functioning CD:3D system (except for a pair places). The turret is however overpopulated by team color textures, so you get a minor minus here [4.5]. The corpse doesn't really reach my texture standards and is hereby doomed to no more than [0.5]

Script: This unit recoils similarly to a cannon tank, although it spews out a quite long sequence of flames and it looks pretty strange. Please remove the rockunit.h include from the script.

Balance: Comparing this unit to the only original flamer in the game, the Core Pyro, we see that this unit (the Purge) got 23% more armor compared to the costs, is a lot faster, but not quite as swift. Moving on to the weapon, we see that both units have the same range, making it a bit easier for me. The Pyro's damage/second output is 141 units per second while the Purge, compared to it's costs, manages to push 99. However, the Purge weapon file have some extensive lines that makes it do twice as much damage against all level 1 units except the tanks (as for example the Rocko, Crasher, Flash or Samson), meaning that it can under most circumstances (as most of the battles in a game are executed by pure level 1 unit hordes) have a much higher damage/second output than the Pyro (again, comparing to the costs) which is quite odd, considering the fact that the Purge is a level 1 unit and Pyro being level 2 and should therefore be much better. This unit is definitely overpowered, but not especially much. If the default damage per shot would be lowered to 2 and the damage per shot for all these tagged units cut down to 5, I would consider the unit well balanced and probably give away another ten. As for now...

My score: Horrible... I can't find anything mean to say, so I guess I'll have to keep it. At least for a while.