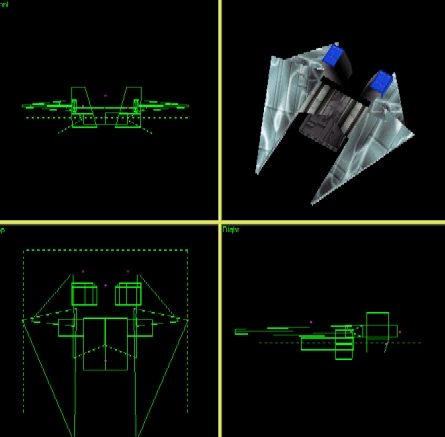 Buildpic: Impressively cool angle of the unit and very nice wake effect. Any attempts to not to give full points here would be just cruel [4]. The background is just like very transparent seas use to be and everything underwater tend to be flat, not sharp, so I can't blame you for having the terrain flat. But the shading of the water masses is a bit odd, since the light should come from above, not from beneath [3]. The mix is acceptable... I see no shadow of the unit, but the camera wiew could be very different [2.5].

Model: Whoa, almost every face  has been removed... very good work *bows*, but there are still two ghost-faces in the middle of the launcher. The size is finally equal to it's power but the front and rear wings are still driven into each other. If you sometimes will update the model once again, you should test to bend in the two front edges more into the middle. Something tells me that it would look better that way. Anyway, since both major flaws were removed the score jumps [4]. The texturing has also been improved to the better (of course), and the final score there must of course be bumped up for the effort [5]. I don't know if I go into my own doom when I tell that the corpse has been improved because I don't remember how the old one looked like and I accidently owerwrited the previous version. Now if the fact is that you didn't touch the corpse, I got to be embarassed because right now it looks good, despite the fact that it is textured with only one texture. Full point...

Script: This script will not be counted, since it is too little to get a score for. The weapon does now hit far away-targets but sometimes overshoot because of the too high velocity. Experiment a little and if you don't find a clear speed, maybe you can take the speed of some other torpedoe in game.

Balance: I think that the authors forgot to balance this one out a bit more, since the only changes made are increasing the armor with 30. This guy still needs metal cost cut by about 500 M to be really efficient.

My score: Model is now perfect, all left is the balancing...