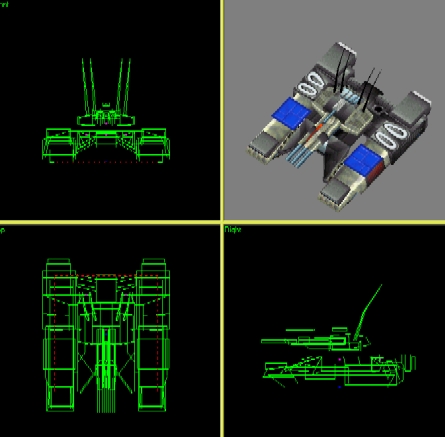 Buildpic: Poof! One of the best I've seen... too bad the PeeWee is a bit too small there.

Model: First of all, the groundplate is not optimal for this unit. You can only hint it sometimes when the unit is turned towards the table or the roof (on your screen, that is). Second... This model is charged with a really mind-breaking number of faces, but despite their numbers, only a fragment of them are actually seen, so I can't really treat them like I ordinary ones, but on the other hand, it uses a very ineffective design on the main body that very much reminds me of a cheese layer and the holes within. There are many /standard" useless faces, as for example the underside of the communication sticks (what's the name, dammit?) on the turret or the very traditional underside-of-the-tracks fault that is so in right now, but the design and concept of this unit is pretty cute [3]. The texturing lacks Cavedog 3D, but that is the only flaw. I see no other major malfunctions anywhere [4]. The corpse is nice, but it isn't wrecked and it lacks the cannon tower [0.5]

Script: Brilliant, brilliant, brilliant. Due to this script, one of five tanks will be created as a commander tank. Twin barrels, different turret, 25% more armor, faster main weapon, minor rockets enabled and the unit is equipped with functioning radar and jammer abilities. Also, each tank will get a random number when created (on the 00 parts on the big picture above) and that is very cool. This is the Script with a big S...

Balance: As you might have noticed after reading through the script part, this unit have a 20% chance to become a champion, so when counting on numbers, I have taken the stats of four standar + one commander version and divided with five. It costs twice as much as a Bulldog while having 200 more armor points. The main weapon is much shorter than for the greyhound, but deals twice as much damage. The little laser gun on the top tips the weapon power over to Greyhound's favor while the Krogoth rockets that the command tanks are equipped with has been slowed down in the script to an almost murderous slow reload time and their damage is even smaller when considering that there is one superior tank of four. The jammer and radar are great equipment when you get it, but the chances are small and their usefullness blur. Also considering that this unit is unable to shoot ever the smallest rock (unlike the bull than can arc over Dragon Teeth without problem), it should cost much much less. Kill off at least 200M to equal it out. I am aware that this unit does twice damage to most tanks known to the TA world (I assure you, there is a hell of a long list in the weapon file), but it also requires 200E for every shot and it is for some reason (maybe the short force-wait in the script) very unskilled in hitting moving units. More power is needed...

My score: Very interesting unit. Fun to play with and very cool script. I might in fact keep it, at least for the AI to waste metal on.