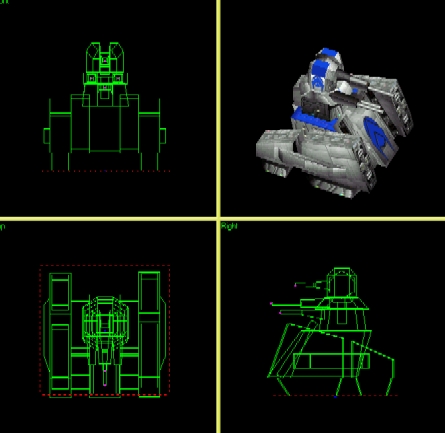 Buildpic: Very nice… The model have a cool angle and acceptable level of polys (i.e. no too low). The colors on the unit are a bit suspicious, through, since the model in-game is colored different. 3.5… The background is very nice, although the heaven far away have a bit strange color. You get full on the background. Model and the rest mix perfectly with good shadow effects. No sign of misplaced light sources. 3 on that.

Model: The model concept is rather ok for me, I see no special good nor bad stuff except one thing. Yep, you guessed right… faces again. The tracks could be completely cut, since no one ever sees them in-game and many other uselles faces has not been removed. A couple faces left inside the model (I don’t complain about faces that show up somewhere, just so you know). The turrets look a bit messy, but it’s probably just me, so it won’t be counted. On the other hand, you’ve “stole” the concept of the Intimidator for the top turret. Tsk tsk tsk :P Anyway, you get a 2 for a rather blend-in model... The texturing is finally as bright as I like it and the logo textures are placed on exactly right positions. On the other hand, much of the texturing is messy in-game and floats into a large grey mass. I also see that you have textured it lighter to the left and all those kind of “extra”-thingies are rewarded so you get 3.5 of 5 (instead of just 3). The corpse is there and although you colored the body with the same texture without even change the angles, you seem to laid down a bit of work making the cannon tower look really wasted. Max for corpse.

Script: I don’t see any special effects here except the aiming script and the recoil of the barrels and it’s not enough to get points for. Well, there is a force-slowing of a weapon, but it’s not enough either.

Balance: This is basically a doomsday machine on tracks with a bit different weapons as the original for much, much lower costs and this make it hard to me to compare… The doomsday got 3000 in armor for 2140 metal while Gargoyle got 1300 for 2250 M. The Doomsday deals 607 points of damage every second (although about 50% are lost, since the annihilator use to kills weak units) while the Gargoyle does 228.5 and have much shorter range on a weapon. I’ve experienced this unit as too weak for it’s costs because you can get about fifteen Storms for the same prise and this unit can hardly withstand even ten. The HLT have just as much armor for four times lower prise, so you can consider your unit too weak. The conclusion that I get after searching in different HPIs for an hour is that the doomsday is even more unbalanced (too weak) than this unit. Bump the armor up twice and you’ll score almost full.

My score: I didn’t like the doomsday… I don’t like this either, sorry. I simply dislike the concept of stapled guns and all units (not buildings) that costs more than 1000 M are too heavy for my taste with a couple exceptions. I fear that this will be obsolete because of better alternatives.